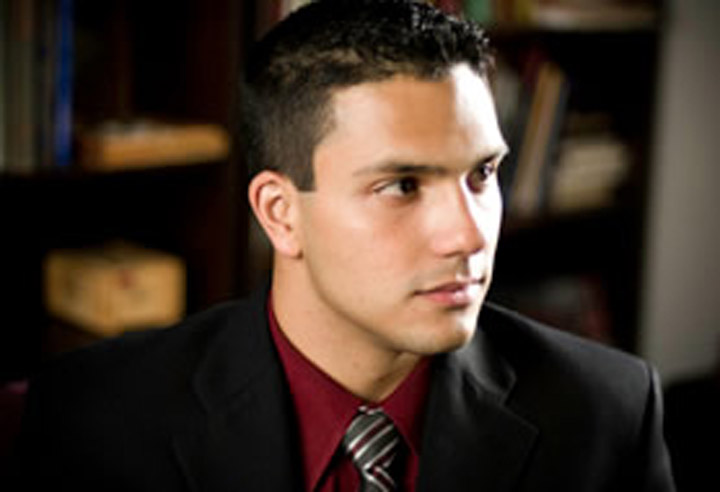 “I'm so indebted to Professor Maier-Katkin and Professor Terry Coonan. I wouldn't have done the things here that I have been able to do without their help.”

With a perfect 4.0 grade-point average, Dayron Silverio is heading toward another amazing accomplishment. By the end of summer term, he will have earned three degrees in three years.

He wraps up work for bachelor’s degrees in political science and Honors in the Major in criminology in the spring. He’ll stick around for the summer term to complete course work for a master’s in criminology.

“He is relentless in the pursuit of his goals,” said Daniel Maier-Katkin, criminology professor and Dayron’s mentor. “‘Relentless’ is the word Dayron has used to describe himself. And, he is. … He’s also extremely bright, kind, insightful and hardheaded,” he said. “I’ve known many exceptional students, but never anyone like Dayron.”

Dayron sought out Professor Maier-Katkin the second week of his first semester at Florida State. “I went to see him because he is the Honors advisor in criminology, and I wanted to get into that program. He tried to talk me out of it.”

Professor Maier-Katkin said he wasn’t trying to dissuade Dayron, but to encourage him to get the most out of his time at Florida State. “I said to him, ‘Your college years are some of the best of your life. Why not enjoy them? Get a broad education. Explore many areas of knowledge.’ I told him that Honors in the Major is a program for juniors and seniors,” said the professor.

Then Dayron explained his academic plan. Since he already had 44 college credits he’d earned in high school, he could get an undergraduate degree in two years and go right into law school.

“He told me he was in a hurry to move on to law school so he could go to work and begin making a contribution to his family. … He was very serious about this,” said Professor Maier-Katkin. “Right then, I knew this young man was exceptional.”

Professor Maier-Katkin told Dayron he would work with him on an Honors project but suggested he reconsider the two-year plan. The professor later learned that Dayron’s mother had brought her son to the United States from Cuba when he was four years old. She wanted him to have the opportunities she thought he deserved.

“Dayron came back to see me about a week later with another idea,” he said. Through the university’s Degree in Three option he would get a bachelor’s in political science. At the same time he would take on the bachelor’s to master’s program offered by the criminology department. Although that path to a master’s degree usually takes students five years, he intended to do it in three.

So, with a revised plan, Dayron began his relentless pursuit of excellence at Florida State. That pursuit included becoming involved in the Hispanic-Latino Student Union, first as the co-chair of its Political Action Committee, then as its chair.

By his sophomore year he had become HLSU’s assistant director. As assistant director, one of his goals was to get the all various Hispanic and Latino organizations on campus involved in the union. He also founded the Latino Leadership Program “to foster strong leadership awareness of the issues surrounding the … Hispanic/Latino community in the United States” and he won the Angie Cintron Scholarship, which is given to an outstanding student involved in HLSU.

This year Dayron is the director of HLSU, a job he takes very seriously. He intends to “create a council that represents every Hispanic/Latino organization on campus to work directly with the HLSU,” he said.

As director of one of the student unions on campus Dayron is a member of the Student Government Executive Board, an opportunity he says “broadens my scope.” Recently, he has been one of three students on an allocation committee charged with making decisions about how to spend $2 million earmarked for technology.

In addition to academics and service, Dayron has also held several jobs on campus. He was a research assistant at the Center for Criminology and Public Policy and in the Department of Political Science. He was an intern in the Office of the Attorney General.

Dayron received an Honors Thesis Award and an Undergraduate Research and Creative Activity Award. These supported research in Madrid, Spain, and New York City last summer. His Honors thesis, which grew from those early conversations with Dr. Maier-Katkin, examines the social and political changes caused by the transition from repression to democracy in post-Franco Spain.

“I interviewed academics, lawyers and key politicians and did research in the National Library. … The library is magnificent. I was thrilled walking up its majestic stairs lined with statues of the great Spanish writers and painters. I could hardly believe I was there.”

Dayron has applied to a number of law schools and has been preparing to take the LSAT this month. The outcome of those efforts will determine what’s next for him. “I see myself working in an international field as an attorney, foreign specialist, government employee, professor or in the military,” said Dayron. “I’m more interested in having a life of substance than making a lot of money.”

Clearly, Dayron’s achievements are the result of his intelligence, focus and hard work, but he points to the professors who have inspired and supported him as the source of his success.

“I’m so indebted to Professor Maier-Katkin and Professor Terry Coonan. I wouldn’t have done the things here that I have been able to do without their help,” he said. “It’s very important to me that people understand that I am standing on the shoulders of giants.”