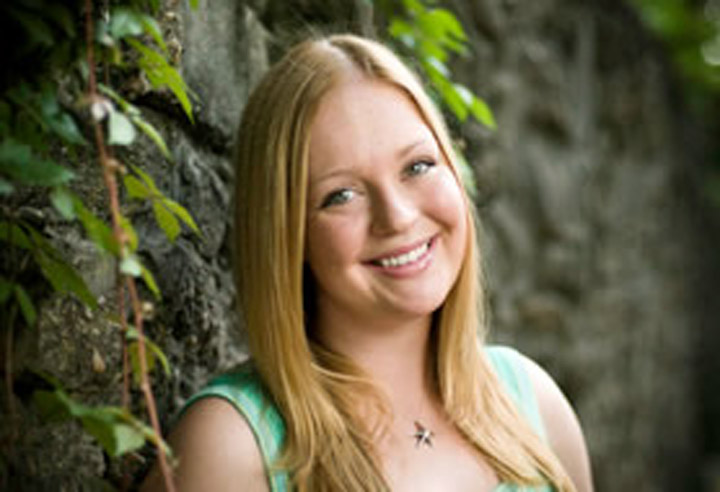 “Medicine is a true passion of mine. I hope to do both clinical work and research in either neurology or oncology.”

Nina Hyvarinen, her parents and two sisters emigrated from Helsinki, Finland, in 1996.

“We arrived, each of us with two suitcases and that was it. None of us spoke English. My father’s brother lived in Florida, so we came here,” said the Florida State senior.

“I learned about perseverance from watching my parents,” said Nina. “I learned that nothing comes without hard work. I learned from them that you do whatever you have to do. If that means working three jobs, you work three jobs,” said Nina.

Nina clearly adopted her parents’ work ethic and drive to succeed. She has a 3.9 grade point average and is working on a double major in psychology and Honors in the Major in biology.

“Nina is, indeed, impressive. She sets the bar high for herself — and always rises to meet it,” said Dr. Patricia Spears of her former teaching assistant.

After she graduates this spring, Nina intends to go to medical school. She has applied to several, including Florida State. “Medicine is a true passion of mine,” said Nina. “I hope to do both clinical work and research in either neurology or oncology.”

An experience even more life-altering than her family’s move to the U.S. ignited her desire to be a physician.

“My sister had just turned 15 and I was 12 when we found out she had an aggressive form of cancer,” said Nina. “At a certain point, she accepted that she was dying and told my parents she didn’t want further treatment. She wanted to spend her time with the family, not in the hospital.”

“It was very hard, but my parents told my younger sister and me that all of us had to accept her decision,” she said. “We spent the rest of her time making every day count.

Nina is very close to her younger sister, who also is a Florida State student. The two live together. “I’m going to really miss her if I go away to med school.”

Last year, Nina worked on her Honors thesis project in Dr. Diana Williams’ neuroscience lab. “Nina examined the ways high-fat diets can alter the function of endocrine systems that control food intake,” said Dr. Williams. “In particular, she focused on … a hormone that is released during meals and reduces food intake. Nina showed that rats maintained on high-fat diets lose their ability to respond to (that hormone) and this could be a mechanism for overeating and weight gain in individuals who regularly consume high-fat food,” she said.

In July, Nina presented her research, for which she had received a Mentored Research and Creative Endeavors Award, at the annual meeting of the Society for the Study of Ingestive Behavior. Dr. Williams said her colleagues were impressed with Nina’s ability to communicate and discuss her work.

“This was no surprise to me,” said Dr. Williams. “Nina had given several oral presentations on her work with us, and they were all excellent.” When she defended her Honors thesis, “Members of her committee commented that it was more like a master’s defense than undergraduate. … Her Honors thesis was one of the most well written papers that I have ever received. We are now preparing a manuscript based on her project, so I expect that she will be a co-author on a journal article in the near future.”

Nina is a member of Phi Beta Kappa, Phi Kappa Phi and Golden Key honor societies. She has been a member of American Medical Student Association since 2008 and is currently its president. She has done more than 580 community service hours during her time at Florida State.

She continues to work as a teaching assistant in the biology department. “I also work as a biology and chemistry tutor at Strozier Library,” said Nina. “I try to encourage my students to do more than memorize facts, but to think critically.”

Nina is also a campus campaign representative for Teach for America, a non-profit organization that seeks to eliminate inequality in education by engaging the top graduates to commit two years to teaching in a low-income school district. “I have found that I really love teaching science. … I would love to do Teach for America if I don’t get accepted for med school.”

Somehow that does not seem likely.

“Having advised dozens of pre-med students in the past,” said Dr. Williams, “I can say that Nina is someone who can be successful in medical school and beyond in her career.”