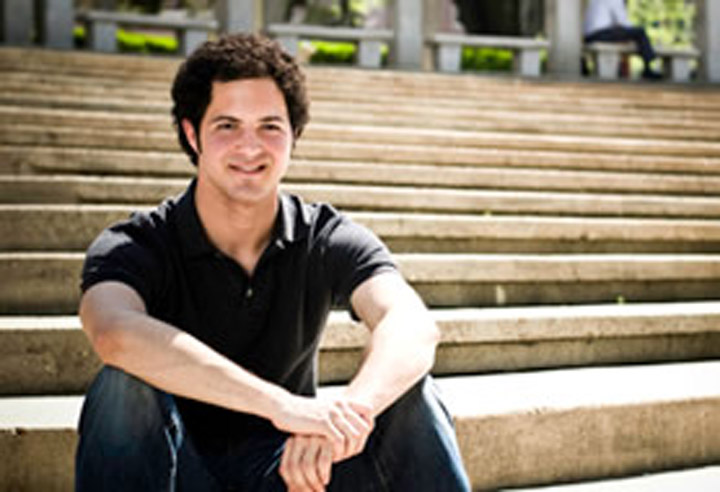 “My Honors thesis is an integral part of this international endeavor. … My smaller prototype database acts as the basis for the ultimate International Etruscan Sigla Project database.”

In the hands of thriller writer Dan Brown, Alex Segers’ Honors in the Major thesis could become a blockbuster along the lines of “The DaVinci Code.”

The senior classical archaeology major is attempting to understand the significance of the pentaculum, or five-pointed star, often found on Etruscan artifacts.

“I am doing my research under the direction of Dr. Nancy de Grummond, a renowned scholar in the realm of the ancient Etruscans, basically the predecessors of the Romans,” said Alex.

Decoding the language of the sigla is essential to understanding the Etruscans, said Dr. de Grummond. “We don’t yet have a surviving text, something equivalent to the Bible or extant texts from the Greeks and Romans,” she said. So scholars have “relied on short inscriptions and art to see into the Etruscan way of life.

“Alexander has shown great courage to take on problems about writing and communication in antiquity, working with undeciphered marks scratched on pottery over 2,000 years ago,” said Professor de Grummond.

“His collection of data has been thorough and the methodology he developed to organize his data is transferable to other similar problems. I think he is making a quite significant contribution to the study of this mysterious material.”

So how does one go about decoding an ancient mystery? “I am doing intensive research and constructing a database of the sigla,” said Alex. For each artifact marked with a five-pointed star, “I am entering factors such as date, provenance, context, artifact type and function, and the location of the sigla on the piece,” he said.

Alex’s project dovetails with a much larger endeavor. “Dr. de Grummond is head of the International Etruscan Sigla Project,” he said. Its goal is “to build an online database to assemble documentation on thousands of sigla of all types.” By looking at masses of data, patterns should emerge that lead to understanding of the symbols.

IESP’s members are Alex and five other Florida State students, Dr. David Gaitros of the computer science department, Dr. de Grummond, and archaeology professors and students from the University of Massachusetts and the University of Milan.

Alex is understandably excited about being part of IESP. “My Honors thesis is an integral part of this international endeavor. … My smaller prototype database acts as the basis for the ultimate IESP database.”

He is a member of the National Society of Collegiate Scholars and Eta Sigma Phi, the Latin and Greek honor society. Last summer Alex took an intensive French language course through Florida State’s International Programs. “I fell in love with the Old World,” he said.

This summer, Alex experienced archaeology in the field as part of a team of students working at the Cetamura site in Tuscany. Dr. de Grummond is the site’s project director.

“It’s a real workout,” he said. “We uncovered some things — pottery handles and some gaming pieces. … The most exciting find was an intact bucchero bowl.” Bucchero refers to a type of black pottery used by the Etruscans.

“Dr. de Grummond took us on some field trips. It was amazing to have her as our guide, she knows so much,” said Alex about their trips to Florence, Volterra, Tarquinia and Orvieto.

After the dig, Florida State students in IESP each gave a presentation on sigla at the University of Milan. Alex’s was on the pentaculum.

This is Alex’s last semester as an undergraduate. He’s considering his options. He said he’d like to host an archaeological series on the Discovery Channel. “I may go to film school or continue in archaeology.” Keep checking the television listings. Who knows, one of these days you may come across a program called “The Pentaculum Decoded,” hosted by Dr. Alexander Segers.