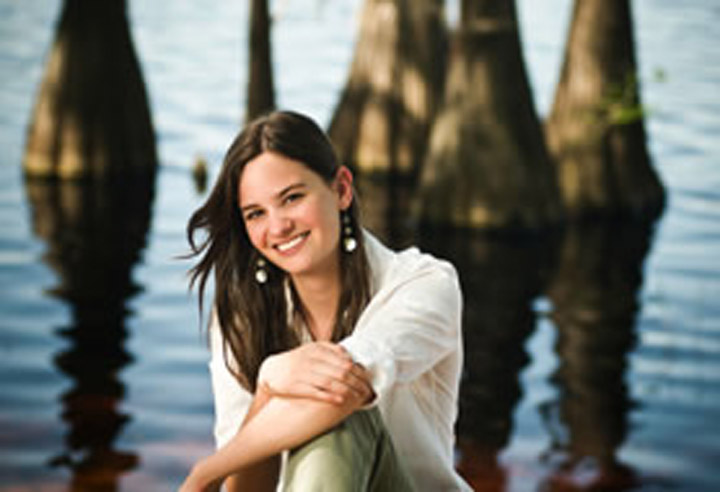 “(Spending six weeks doing field research on the island of Boca Brava) was an amazing opportunity. It was really tough to leave.”

Megan, a senior biology major and a 2010 winner of an Undergraduate Research and Creative Endeavors Award, was doing serious research in behavioral ecology on Boca Brava, an island off the southern coast of Panama. The award, given by the Office of Undergraduate Research and Creative Endeavors and sponsored by the Office of National Fellowships, supported the trip. Behavioral ecology attempts to understand the ecological and evolutionary reasons for animal behavior and how behavior helps creatures adapt to the environment.

“I gathered data on the behavior of male lance-tailed manakins,” said Megan. “The lance-tailed manakin is a small bird that lives in dry tropical forests. It is an interesting species because the males form cooperative partnerships to sing and dance to attract females.”

Megan was working with her mentor, Florida State biology professor Dr. Emily DuVal. Dr. DuVal has a long-term field site on Boca Brava, where her research group investigates the evolution of social behavior in animals, particularly birds, year round.

“(Lance-tailed manakins) have complex cooperative courtship behavior that depends on long-established dominance relationships among males in partnerships,” said Dr. DuVal. “Males display together for females, but the social cues that stabilize males’ dominance relationships and potentially serve as indicators of pair stability to females” are not fully understood, she said.

Clearly, this educational adventure was a transformative experience for Megan. “It was an amazing opportunity. It was really tough to leave,” said Megan. “Now that I am back in Tallahassee, I find that I hear every bird that sings around me.”

Megan discovered her passion for behavioral ecology her first semester as a junior at Florida State when she took Dr. DuVal’s animal-behavior class. “I loved that class. I was always eager to go to it and sad to leave when it was over.” Her fascination with the subject led to her getting the highest grade in the class.

Lance-tailed manakins aren’t the only creatures Megan has studied. Internships with the Florida Fish and Wildlife Conservation Commission have provided her opportunities to do other field research.

She spent 10 days in Key Largo researching population trends of the Key Largo cotton mouse and wood rat. “Both species are unique to that area of Florida. They are not at all like the mice and black rats that people normally associate them with, but are reclusive, non-aggressive, and live in hardwood forests, not sewers and cities.”

So how do you count wood rats and cotton mice? “We set out baited live-traps to capture the animals, then ear-tag them, take DNA samples, and release them. Unfortunately, they are critically endangered, and few remain in the wild,” she said.

She also interned with the Bear Management Program of the FWC. “I conducted a survey by telephone of people who had contacted the FWC about a bear-related incident, and I gauged the effectiveness of the FWC in response to human-bear conflict. I also gave presentations about bears at local elementary schools and festivals to raise public awareness.”

Recently, Megan traveled to the College of William and Mary for the annual meeting of the Animal Behavior Society with other students from Dr. DuVal’s lab. “She presented some of her analyses of lance-tailed manakin duet initiations. The resulting co-authored poster was awarded an honorable mention in the competition for best undergraduate research poster.

“Megan did an excellent job of presenting and explaining the work,” said Dr. DuVal. She will continue with her research and use her results for her Honors in the Major thesis.

Megan plans to go to graduate school after completing her bachelor’s degree this spring. “Ultimately, I hope to establish a career in biological research,” she said. From all indications, it seems that hope will be realized.