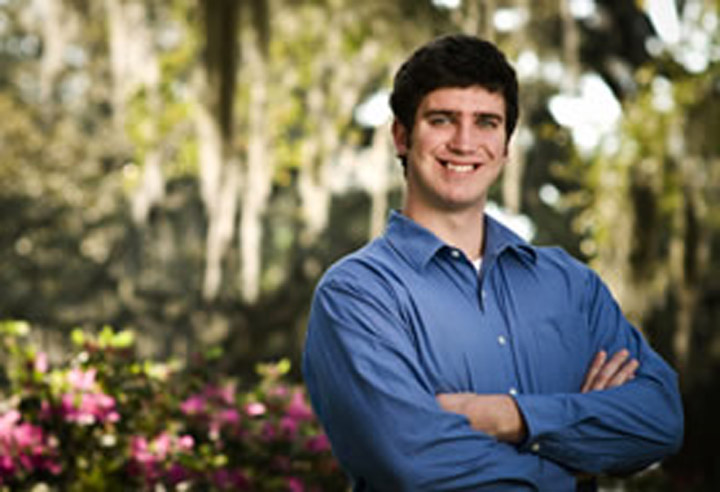 “One of the beautiful things about graduate school is that you grow through your exposure to people of other cultures.”

In an application to the Fulbright Scholarship committee, Kerry Gilmore, a Ph.D. candidate studying organic chemistry, proposed continuing the research he and colleagues have been doing at Florida State at the Consiglio Nazionale delle Ricerche in Bologna, Italy. Apparently, the committee liked the idea, because he got the scholarship.

Craig Filar, director of the Office of National Fellowships, said, “Not many students from the scientific disciplines apply for the Fulbright. … We work with science students applying for awards such as the Goldwater, the Hollings and others, but many of them do not think the Fulbright is applicable to them, which is not correct.

“I was excited when Kerry expressed interest in the program. His successful application demonstrates the excellence of his research in chemistry and his initiative. … I hope his success will inspire other students in the sciences to explore international opportunities,” said Filar, whose office helps students find their way through the labyrinthine process of applying for such a competitive award.

A full grant from the Fulbright Foundation provides a stipend for living expenses and the freedom for Kerry to pursue the research opportunities that come his way at the Consiglio Nazionale. The scholarship, sponsored by the U.S. government, is the flagship international educational exchange and is designed to “increase mutual understanding between the people of the United States and the people of other countries.”

“International opportunities obviously enrich a student’s education, but the bond that can be forged with scientific communities in other countries can be invaluable,” said Filar.

Kerry grew up in Cape Cod, Mass., and began his undergraduate career at Roger Williams University in Bristol, R.I., intending to become a marine biologist. “When I took organic chemistry, it just clicked,” he said. As his graduation approached, he began seriously thinking about Boston University. But then he met Florida State chemistry professor Dr. Igor Alabugin.

They met when the professor was giving a lecture at Roger Williams. To say Dr. Alabugin was impressed by Kerry is putting it mildly. He remembers two things about that visit: a 9-foot polar bear on loan to the school from the Smithsonian — and Kerry. “Kerry left a far stronger impression. … His questions (got) at the heart of a complex chemical problem I presented to the audience. … His questions were expressed with impressive clarity and were asked with genuine interest.”

Dr. Alabugin persuaded Kerry to check out Florida State. Impressed by the beauty of the campus as well as “the intelligent, driven, helpful faculty and highly motivated graduate students,” he decided this was the right place to be.

Kerry has worked with Dr. Alabugin to put together “a critical review of the Baldwin rules,” said the professor. “The rules have been extraordinarily useful for the organic-chemistry community in the last 30 years. … Recent findings reveal limitations of these venerable rules and call for their critical overhaul.”

Working on this project, Kerry read and analyzed several hundred research papers. “Kerry very well may be one of the world’s most knowledgeable experts in this field,” said Dr. Alabugin.

Besides the molecular research Kerry has been doing, which may lead to the cheaper and more efficient synthesis of pharmaceuticals, his work has had other important results. “He has mentored a talented group of undergraduates,” said Dr. Alabugin. Two of his most recent students have won important research awards. “Their success shows his ability to motivate and educate his protégés.”

Kerry says he enjoys teaching and is proud of being nominated for Teaching Assistant of the Year in 2007. Dr. Alabugin has such high regard for Kerry’s teaching skills, he asked him to take on his lectures while he was abroad; these were classes of more than 240 students.

“Teaching makes you a better scientist. You have to really understand something to explain it — and you have to learn to be able to tell if someone’s has really gotten what you are trying to explain,” said Kerry.

“One of the beautiful things about graduate school is that you grow through your exposure to people of other cultures,” he said. “I’ve had colleagues from Germany, Russia, Lebanon, South Korea, China and the U.K. It broadens your scope to see how people look differently at the same issue … (and) take a different approach to problems.”

Dr. Alabugin has observed Kerry’s ease with people. “He has a rare gift for communicating with people of different backgrounds and origins. He has a quick wit and a winning combination of intelligence, kindness and humor,” said the professor.