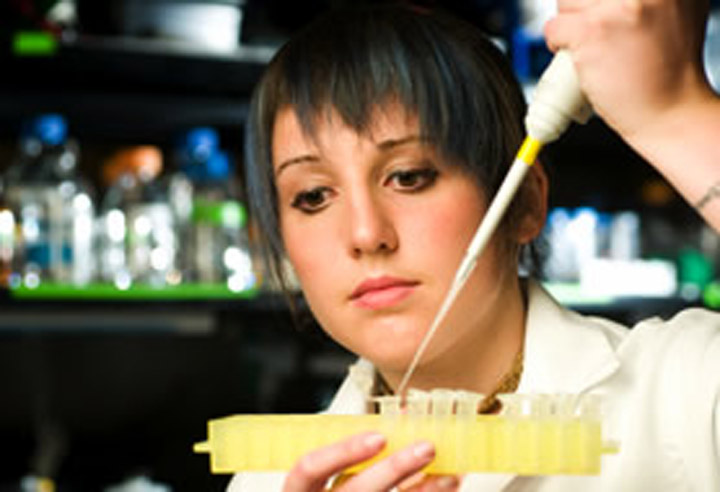 “Dr. Bolanos is my absolute favorite professor. He is my mentor, advisor and boss. … He has taught me so much.”

Her experience as an undergraduate researcher captivated her when she was a junior. “I absolutely fell in love with it,” said Lindsey. “I have been doing research ever since.”

When Lindsey met with Dr. Carlos Bolanos, professor in the psychology’s neuroscience program, to express interest in joining his lab, she encountered some resistance. “He was known to be demanding,” she said. “He suggested I get my feet wet in some other lab. After doing research in another lab over the summer, I met with him again,” said Lindsey. “He allowed me to volunteer in the lab. By the end of the semester he had hired me as a lab technician.” Month by month, Lindsey’s responsibilities in the lab grew.

Today, she says, “Dr. Bolanos is my absolute favorite professor. He is my mentor, advisor and boss. … He has taught me so much. There is no way to sufficiently express how much I appreciate what he has done for me.”

For his part, Dr. Bolanos thought Lindsey simply wanted to brainstorm about potential projects. “I was quite surprised to realize that she had conceived a project (all on her own!), which was novel and interesting. This is not to say I perceived her as incapable, but just I did not expect her to have a well-designed project that addressed an area of much-needed research in the field of basic neuroscience and pharmacotherapeutics.”

In Dr. Bolanos’ lab, researchers study the interactions between drugs and mood disorders on developing animals. “The focus of my research is the developmental effect of antidepressant treatment on females,” Lindsey said when describing her Honors thesis, which she will defend this summer.

“This year we have been trying to spread the word and get more students involved and aware of all the amazing research opportunities on campus. The biggest thing, which we hope will have a lasting impact, was starting an Undergraduate Research Journal for the university. The first edition is going to be published this summer.”

Lindsey’s devotion to scientific research is evident — as is her success in this realm. Dr. Bolanos regards her as “the kind of student interested in science we want to encourage and promote.”

Still, she hasn’t abandoned literature. “Enamored is the word I would use to describe my reaction to post-modern literature,” said Lindsey. “The first lit class I took at Florida State was Contemporary Literature with Fleur Chevalier. She introduced me to the novel ‘Ava’ by Carole Maso and the kind of lyrical prose I love so much.

“I was moved and impressed by Dr. Timothy Parrish. The way he interacts with texts is similar to the way I find myself interacting with them,” she said.

“Dr. Paul Outka made me read ‘Moby Dick’ and gave me a real appreciation for 19th -century literature,” said Lindsey. “He gave me hope (that) my love of science and my love of literature could be combined. He spoke with me about the merging of those two theoretically distinct fields and the way in which … the lines between them have been blurred by post-modern and post-human texts.”

Perhaps Lindsey won’t have to give up one of her loves for the other after all.