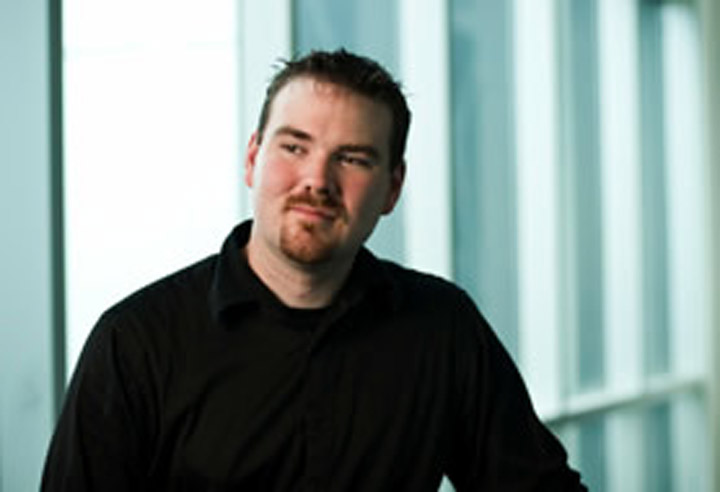 Name: James Dickson
Major: The robot can climb up a carpeted wall, but it needs to be able to climb on tree bark.

“Honors in the Major, Mechanical Engineering and Anthropology”

Imagine a robot with a cockroach’s ability to dart across the floor, up a wall and across the ceiling. James Dickson, his professors and colleagues have imagined that and more. Working with biomathemeticians who analyze how the insect moves to develop mathematical models of their motion, James and his fellow Florida State researchers intend to create robots with the agility of a roach.

James, who graduated in May with Bachelor of Science degrees in mechanical engineering and anthropology, is spending this summer in the Scansorial and Terrestrial Robotics and Integrated Design Laboratory continuing his work on the robot, ICAROS. The lab, more succinctly referred to as the STRIDe Lab, is part of the mechanical engineering department of the College of Engineering. Scansorial means having the ability to climb.

James’ work with robotics began as an Honors thesis for which he received a Bess H. Ward Honors Thesis Fellowship.

“ICAROS is a small robot, about 200 grams,” said James. “We are trying to engineer it to walk, fly and climb.”

What could such a wondrous device be used for? When the robots are able to successfully perform all three actions, “we will see them employed in field applications such as search and rescue, surveillance and (removing landmines),” said Dr. Jonathan Clark, department of mechanical engineering professor and James’ Honors thesis director.

“The robot has flapping wings. I’m working on its climbing. … Right now, the robot can climb up a carpeted wall, but it needs to be able to climb on tree bark,” said James. To date, no dynamically climbing robot has been built that can climb a tree, nor has one been created that can both climb and fly. “There are quasi-static robots that can climb a tree, but extremely slowly,” he said.

Anyone who has ever played with a wind-up toy can see that this is very cool project. Lest you get the impression James spends his time playing around in the lab, read on.

In summer 2009, he wrote a grant proposal to the National Aeronautics and Space Agency to get money for the STRIDe lab to develop a large lunar regolith — or topsoil — excavating robot to compete in the first Lunabotics Mining Competition. The team was granted the funding in the fall semester, and since has been working to develop the 80 kg robot for the upcoming competition.

“James is a remarkable young man. He is hardworking, dependable, personable and creative. He has the rare ability to successfully tackle a large number of projects simultaneously,” said Dr. Clark. James’ selection for honor societies suggests that Dr. Clark is correct in his assessment.

James was president of three honor societies at the same time in 2009. He worked to establish a student-led recognition project for professors in the College of Engineering as president of Tau Beta Pi, the engineering honor society. He reactivated the Florida State chapter of Pi Tau Sigma, an international mechanical engineering society, working to increase the group’s membership (when he became involved there were four members; now there are 21) and energize the Mechanical Engineering Help Center.

Through the STRIDe Lab, James works with children at the Mary Brogan Museum of Art and Science.

While working on his anthropology degree, James, who has been diving since he was 12, worked on archaeological projects in Apalachee Bay. Last summer, James spent several weeks diving in Indonesia.

When he has completed the master’s program in mechanical engineering at Florida State, James hopes to combine his love for diving with his knowledge of robotics to develop robots that can work in the deep.