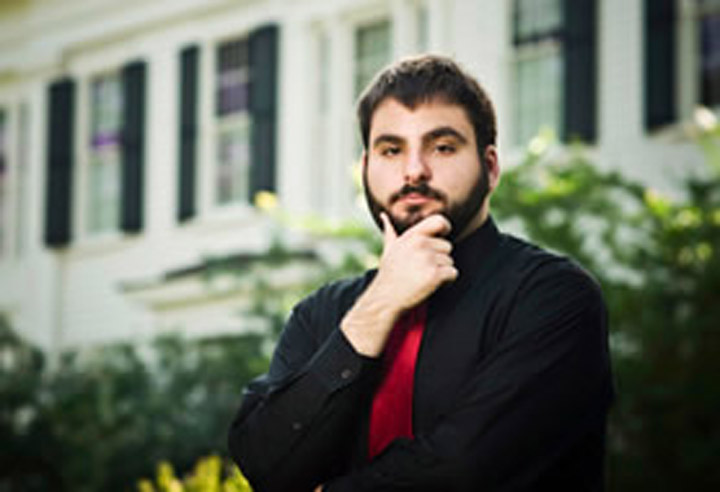 Kevin Uhler is an instigator. “When I see a need, I try to figure out how it can be met,” said the recent Florida State graduate.

After missing several lectures he would like to have attended, “I discovered that there wasn’t a central list of all the lectures from the various disciplines that are scheduled on campus,” said Kevin, who last month earned a Bachelor of Arts in History. He decided to do something about it and made an appointment to see Dr. Joe Nosari, associate vice president in the Office of the Provost.

When Kevin proposed that he and his friend Sandy Simmons start a lectures database, Dr. Nosari tried to dissuade them. “I knew how difficult it is to get information from academic departments. (But they) were insistent that it could be done,” he said. “They proved me wrong.”

The database can be found at lectures.fsu.edu. The range and quality of lectures presented at Florida State campus is stunning. Topics range from prospects for peace in the Middle East to the environmental history of the Florida coastal seas. These lectures are a rich educational resource for both students and faculty.

“We probably have only about 20 percent of the departments contributing at this point, but we’re building our network,” said Kevin.

Kevin’s drive to excel is clear. He maintained a 4.0 grade point average and was on the President’s List every semester of his undergraduate years. He is a member of Phi Beta Kappa and Phi Kappa Phi honor societies. He is also a 2010 Outstanding Student Scholar. To quality for this award, a student must have at least a 3.9 GPA, or have successfully defended an Honors in Major thesis or have completed 18 hours of honors coursework.

“What impressed me the most about Kevin is his understanding of the significance of having a research experience while an undergraduate,” said Jeanette Dummer, coordinator of the Honors in the Major program. For his Honors thesis, “he sought to work with the venerable Professor Jim Jones in the history department and was not intimidated by the amount of work required.”

Kevin received an Honors Thesis Award that he used to do manuscript research for his paper, ” Melting the Solid South: The 1928 Presidential Election in Florida.”

His talent for making things happen has made a difference beyond the Florida State campus. “The people at the nursing home in South Florida where my great-grandmother lived seemed depressed most of the time. But when someone came to play the piano for them they perked up and seemed happy,” said Kevin.

“Florida State has so many music ensembles, I thought why not try to get them interested in playing for people in nursing homes?” Kevin, who says he is not a musician, began talking to music students about the idea and many of them were eager to participate. “I call the project ‘Young at Heart.’ It’s a liaison between the nursing homes and the music ensembles,'” he said.

Isn’t it a bit unusual for a young man to think about how to make old people happy? “No, at least not for me. I feel like I am 80. Maybe it’s because as a history major, I sort of live in the past. … I listen to old music. I can talk to my grandparents about Bing Crosby or the Andrews Sisters.”

Since the fall, Kevin has been volunteering at Big Brothers Big Sisters as a mentor for a now-8-year-old boy. “I always wanted a younger sibling. I’m really enjoying working with this child. I sort of identify with him because I excelled at math, and was isolated by shyness. He’s like that, too,” said Kevin. “I want him to know he can do anything.”

This year, Kevin helped fellow students with their studies as well. “I was a tutor with the Academic Center for Excellence.” The ACE program provides free peer tutoring. “I helped undergraduates having problems with math, history or economics,” he said.

Because Kevin took advantage of the history department’s combined B.A./M.A. program, he has already taken his first graduate-level history class and is continuing his studies at Florida State this summer. “I would like to earn both a Ph.D. in American history and a law degree. … I would like to practice law and teach U.S. political history.

The resolve Kevin has shown during his college career make it a safe bet he’ll do it.