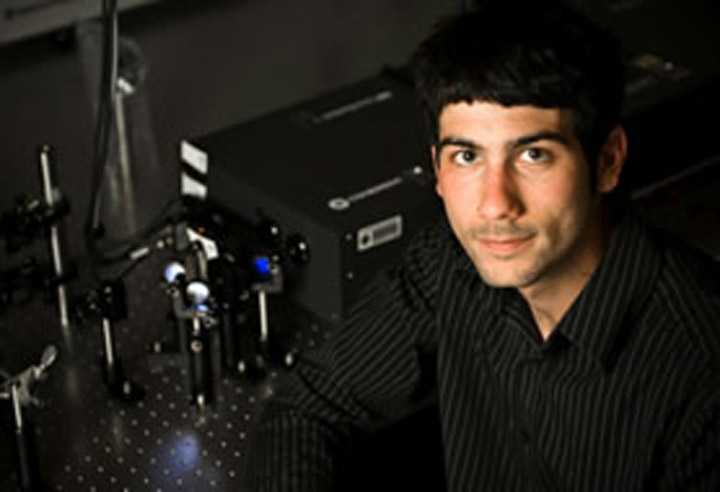 “We put all the pieces together and were finally able to see the data we were looking for. This exhilarating feeling was my first true triumph in research.”

You might say Andrew Attar has the soul of a research scientist.

When asked to describe an important moment in his college career, he described working on setting up an experiment for solar-energy research he was doing with post-doctoral researcher Dr. Daniel Blumling last summer.

“(We) spent most of every day over a period of several weeks working on a difficult challenge that was inhibiting me from getting my project off the ground. One afternoon, we put all the pieces together and were finally able to see the data we were looking for. This exhilarating feeling was my first true triumph in research, and it is an experience I will always remember.”

It was a memorable experience for Dr. Blumling as well. “One of the most remarkable things about Andrew’s development of his research project is that he was studying nanoscale fluorescent materials using ultrashort laser pulses — two phenomena that require an understanding of quantum mechanics, a course he hadn’t even taken at the beginning of his research,” said Dr. Blumling.

Andrew had begun working in Dr. Kenneth Knappenberger’s chemistry lab as a Directed Independent Studies student spring semester last year. In the short time since, he has received two significant acknowledgements of his work. The first was an Honors Thesis Award of $1,000 given by the Honors Office to support his research. “The thesis advisory committee members all commented that they had not previously seen a student exhibit such a strong command of a research topic at this stage of a career,” said Dr. Knappenberger.

The second was an Atlantic Coast Conference Fellowship for Undergraduate Research. He was one of two Florida State students to receive the university’s first ACC Fellowships. Andrew hopes the research that garnered these awards will revolutionize the way solar energy is captured and ultimately will lead to the development of nanomaterials-based solar-voltaic cells. In his application for the ACC award, he wrote that he hopes to “perform research that may play some part in the world’s efforts to produce safe, affordable, efficient and renewable energy.”

Dr. Knappenberger said, “When I met Andrew, more than a year and a half ago, he told me he wanted to use his training in science to work in an area that would be of societal significance, particularly alternative energy. So together we developed a project in the general area of solar-energy conversion.”

Impressed by the tenacity Andrew has shown when faced with obstacles in his work, Dr. Knappenberger said, “At the point where the typical person might consider giving up, Andrew digs in.

“When most students went home for winter break, Andrew worked in the lab and carried out critical experiments that not only salvaged his project, but also launched a few new ones for the group,” said Dr. Knappenberger.

“Today, I think Andrew’s research has as much of his own influence as it does mine. A successful researcher requires a blend of theoretical understanding, laboratory know-how and a lot of gumption. (He) seems to have the appropriate balance (of those qualities).”

Andrew completed his Honors in the Major thesis in Chemistry under the direction of Dr. Knappenberger and in the spring took the professor’s graduate-level spectroscopy class. “(He) was the top student. He is, of course, an undergraduate,” said the professor.

Andrew is grateful for the support and guidance he has received from his mentor. “Dr. Knappenberger has been immeasurably significant to my development as a young researcher. He has motivated me to excel as a student of chemistry and helped me set goals higher than I would ever have done by myself.”

One of those goals is to pursue a Ph.D. in physical chemistry when he graduates in spring 2011. “I hope to gain the experience and knowledge necessary to follow a research career in the area of renewable energy. Specifically, I hope to work for one of the National Laboratories sponsored by the U.S. Department of Energy.”