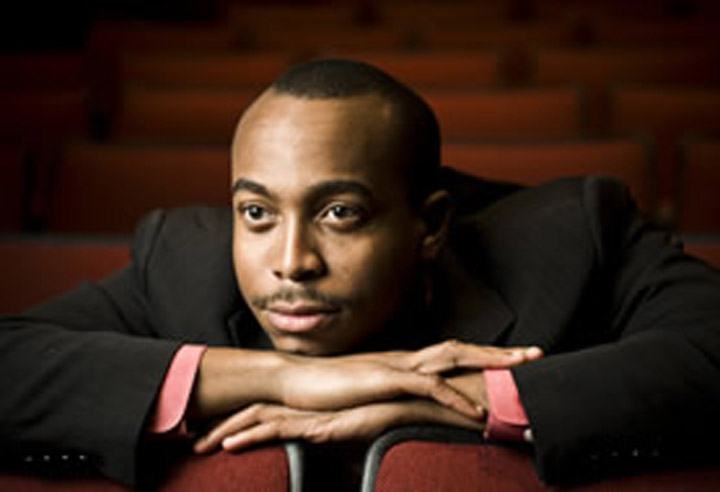 “I wanted to bring this play ('The Brothers Size') to Florida State, and I hoped we could get (playwright) Tarell Alvin McCraney to come here, too.”

When Al Heartley came back to The Florida State University late last summer, after an internship in Chicago with the Steppenwolf Theatre Company, he was on fire with passion for theater. His enthusiasm was not lost on his professor and mentor Dr. Irma Mayorga. She encouraged him to undertake an independent project and to apply for a $5,000 Atlantic Coast Conference Fellowship to support his work. That’s exactly what he did.

“I had seen (the play) ‘The Brothers Size’ by Tarell Alvin McCraney while I was in Chicago. He’s an amazing new African American playwright. The play is part of his trilogy, ‘The Brother/Sister Plays.’ I wanted to know more about his work. I wanted to bring this play to Florida State, and I hoped we could get Mr. McCraney to come here, too ” he said.

“The first day of spring classes I got an e-mail from the Office of Undergraduate Research and Creative Endeavors telling me I had gotten the fellowship,” said Al.

It was well deserved. “The sophistication of his project and its goals impressed faculty committee members as exceedingly excellent and deserving,” said Dr. Mayorga.

Al went to work under the guidance of Dr. Mayorga researching, selecting a cast and preparing for an April 1 opening at the Augusta Conradi Theatre of “The Brothers Size,” which he would direct.

“It wasn’t certain that Mr. McCraney would be able to come to Tallahassee, but in mid-February he said he was coming,” Al said.

To understand the significance of getting playwright McCraney to come to Florida State you should know a few things about him. Currently he is the Royal Shakespeare Company’s international writer in residence. Among his many honors are London’s Evening Standard Award for Most Promising Playwright (2008) and the Inaugural Recipient of the New York Times’ Outstanding Playwright Award (2009). McCraney is a 2007 graduate of Yale School of Drama. He is 29 years old.

“The production of ‘The Brothers Size’ was stupendous, artistically mature and deeply affecting. Audiences were palpably moved by the play’s ideas and by Al’s directing abilities for the work,” Dr. Mayorga said.

“Mr. McCraney was a generous guest artist who shared his work and spirit with our undergraduate students for three days. … In this sense, Al’s success created an indelible (experience) for hundreds of people here at Florida State.”

“Mr. McCraney told me he enjoyed the production, and that I had done a great job. It was very satisfying to hear,” said Al.

“I’m so grateful to Dr. Mayorga. She challenges me and pushes my intellectual abilities. She has constantly encouraged me and supported my endeavors, including serving as my Honors thesis director,” he said.

“It was her African-American theater class that got me excited about research,” Al said. Viewing a film version of a play — “Tyler Perry’s Madea Goes to Jail” — sparked his interest in the differences and relationships between the two media, particularly in the work of Tyler Perry. That interest became the subject of his Honors thesis, for which he was awarded an Honors Thesis Grant.

Al joined a student theater company, Leave Your Mark Productions, which “produced August Wilson’s play ‘Jitney’ as an independent, wholly student-made and student-run production,” said Dr. Mayorga. He also directed a Leave Your Mark production of “Doubt” by John Patrick Shanley and is one of two artistic directors for the company.

Al has been on the Dean’s List every semester. He’s a member of Phi Eta Sigma, Garnet and Gold Key and Omicron Delta Kappa honor societies.

He has served the Student Government Association as a senator for undergraduate studies and on SGA’s judiciary, finance and programming allocations committees. He has been accepted for his third year as a resident assistant. He has served in that capacity in the Broward, Landis and Gilchrist Complex.

Al recently received the Moore Undergraduate Research and Apprenticeship Award in the amount of $5,000 to study theater this summer at the University of North Carolina-Chapel Hill with Dr. Ashley Lucas.

“After graduation, I plan to move to Chicago to work in theater. I am interested in artistic administration as well as directing. I plan to go to graduate school for a Master’s of Fine Arts in directing or dramaturgy and literary criticism. Then I would like to get a Ph.D. in theater studies and teach.”

Dr. Mayorga predicts a successful life in theater for Al. “I imagine in 10 years (he) either will be working as a director for a nationally renowned U.S. theater company as a director, or will have started his own company, which will endeavor to add to the remarkable work of African-American theater. (Or) he might be … finishing up his doctoral dissertation and setting off on a career as a scholar of black theater.”