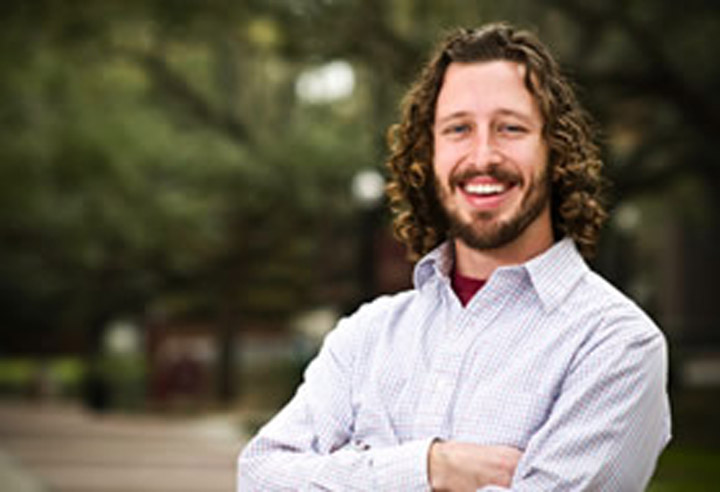 “Studying meteorology, I developed a fascination for how the weather affects the circulation of the ocean, and vice versa, so I applied to graduate school in physical oceanography.”

It’s a fortunate student whose graduate-school experience includes a cruise on the open sea. Austin Todd is just such a lucky fellow. When his advisor, Dr. Eric Chassignet, professor of oceanography and director of Florida State’s Center for Ocean-Atmosphere Prediction Studies, asked Todd if he would like to help collect samples of seawater during a research cruise across the Southern Ocean to Antarctica, the answer was yes.

In early February 2008, Austin and about 30 other scientists boarded a 300-foot ship named after the late scientist Roger Revelle, who, in the 1950s, discovered that excess carbon dioxide could not be absorbed by ocean water as previously believed. This cruise, an International Polar Year project, followed the same course as another research cruise in the 1990s, making it possible to compare samples taken then with the newer ones.

“I worked the second shift, from midnight until noon,” said Austin, who finished his master’s in physical oceanography this spring and is now working on a Ph.D. “During those 12 hours, we were responsible for the C.T.D., which is an instrument that continuously records measurements of the conductivity and temperature of the water and the depth at which they were collected.

“We would launch the C.T.D., collect water samples from different depths, then we’d haul it up and move it to a loading deck where the chemists would take samples for their research. I was responsible for collecting samples for nutrients, salts, carbon 14, dissolved organic carbon, and a few other chemical properties. … After that was done, it was right back to preparing the (instrument) for deployment again.”

What was it like to be surrounded by scientists from all over the world on the 45-day cruise? “It was all science, all the time,” said Austin.

His shift could be grueling — imagine 35-foot waves and sustained winds of 65 knots (about 75 mph). Then imagine the thrill of watching whales investigate the ship, a seal frolicking in the icy water, an albatross soaring above you. And then there were the sunrises. “I saw some amazing sunrises. … The experience was incredible,” he said. (For more about Austin’s experience aboard the Roger Revelle, check out his blog, coaps.fsu.edu/~todd/welcome.html.)

Austin is lucky to have had this experience, but the fact that he had been a lab assistant for three years before starting graduate school prepared him for the opportunity. He came to Florida State as a freshman because of the outstanding meteorology program. “Studying meteorology, I developed a fascination for how the weather affects the circulation of the ocean, and vice versa, so I applied to graduate school in physical oceanography.

“With my interests in coastal ocean circulation, the Center for Ocean-Atmospheric Prediction Studies provided the perfect outpost for me to work with faculty and researchers who are at the forefront of the ocean-modeling community. … The caliber of research that occurs here is remarkable.”

Dr. Steven Morey, scientist at COAPS, also uses the word “remarkable” when talking about Austin. “He has demonstrated, since his undergraduate years and through his graduate-school career, a remarkable aptitude for applying knowledge of meteorology, oceanography, numerical analysis and statistics … to real-world problems.”

In January, Austin was selected as the first recipient of the Guy Harvey Excellence Award in Marine Science by the Florida Sea Grant College Project. He will use the $2,000 award to continue his research to determine how gag grouper larvae are transported from spawning grounds 50 to 200 miles from shore to the seagrass beds along the coast of Florida’s Big Bend.

Austin is vice-president of the Thalassic Society, which promotes fellowship among the various disciplines within the realm of oceanography. He was elected the oceanography program’s graduate-student representative within the Department of Earth, Ocean and Atmospheric Science. He has worked with middle-school students through Saturday at the Sea, an educational project of the department of biological sciences.

Austin expects to finish his doctorate in spring 2012. “As a coastal oceanographer, I would like to continue studying the physical characteristics of the world’s oceans on the continental margins, and how physical processes in the ocean affect ecosystems,” he said.

Dr. Chassignet has confidence that Austin’s work will lead to great things. “(He) has already made a significant contribution to our understanding of the ecology of the Big Bend Region.”