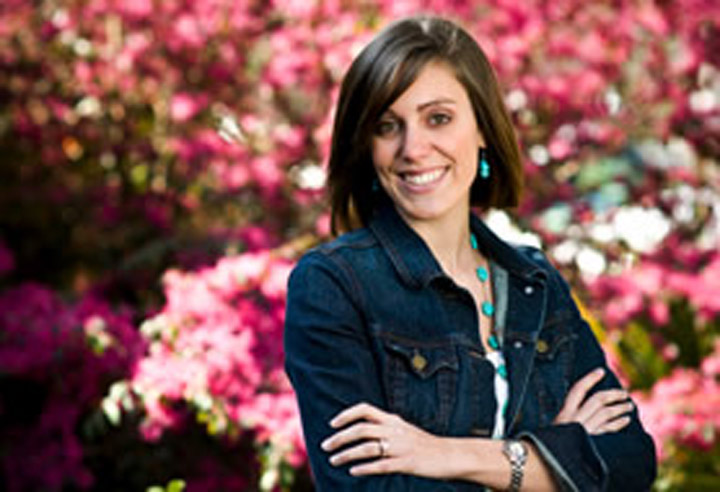 “I love orientation. The new students are so psyched about coming to Florida State.”

Shelby Henry remembers the excitement — and trepidation — she felt when she came to Florida State. “I had lived my whole life in Panama City. I think I know everyone in town. I was going to be thrown in with 40,000 students, and I would know hardly anyone,” she said.

She needn’t have worried. Shelby, who graduates this month with a bachelor’s degree in psychology, quickly found a circle of friends and her place on campus.

“Our first night on campus, my roommate and I were sitting on a bench at Landis Green. It seemed like everyone knew everyone else, and I was feeling kind of out of place,” said Shelby. Suddenly a Frisbee landed in her lap.

“Some people were playing Ultimate Frisbee and invited us to play, so we did. It was really fun. When they got ready to leave, the students said they were all from the Wesley Foundation and invited us to attend church with them on Sunday.

“That Sunday I went to church at the Wesley Foundation. Every day during the first week of school there was an event there. Right away I realized that was where I was supposed to be,” she said.

“My involvement with the Wesley Foundation kept me centered. I think that sometimes students lose focus of what college is about,” she said.

This summer, while her fiancé finishes his degree in criminology, Shelby will be on campus conducting a couple of orientation sections. “I love orientation. The new students are so psyched about coming to Florida State.”

Shelby is graduating a year early. “I came in as a freshman with 45 hours of college credit from high school,” she said. “I thought that was great, but now I wish I wasn’t leaving so soon.”

Until recently, she had planned to go for a graduate degree in rehabilitation and mental health counseling. Then, about a month ago, she had an epiphany.

“It occurred to me that I am really enjoying my job in the psychology advising office, and that I love the university atmosphere. I like being around motivated, goal-oriented people. I enjoy helping students learn about the resources available to them,” said Shelby. “I thought, ‘If I like what I am doing now, how can I keep doing it? So I began thinking about getting a master’s in student affairs.”

It was serendipity that led Shelby to this line of thought. After working for a year in the psychology department’s advising office as a receptionist she was given the opportunity to do peer advising, which she has done for more than a year. “I love it. I use what I have learned about interpersonal communication,” she said.

With that Shelby is reminded of “my favorite professor, Mark Zeigler.” He was instructor for an honors speech class. “We were in lectures two days a week and then would be small groups for one day giving our speeches. He was in our small group. He made the class so relevant, and he made you feel as if you were more than just another student in his class.”

What Professor Zeigler remembers about Shelby is “how interested and attentive she was to fellow student speeches. That’s the true mark of a scholarly citizen,” he said.

Shelby is a member of Delta Alpha Chi, a non-denominational Christian sorority that began at Florida State in 2006. It is not affiliated with the Panhellenic Society.

“We have about 70 girls. … We don’t have a house, but hope to have one eventually. The founders are at a place in their lives where they can begin to think about contributing to making that happen.”

The past two years, Delta Alpha Chi has participated in Florida State’s annual Dance Marathon, a benefit for the Children’s Miracle Network. Last year, Shelby stayed awake and on her feet for 32 hours straight. “Then I went home and slept for 15 hours straight.”

For this year’s event Shelby was Greek relations chair. “The marathon was set up differently,” she said. Instead of participants staying up for 32 hours, “there were two teams who had to stay on their feet for only 20 hours. I told my sisters, ‘I could do that with my eyes closed,'” Shelby laughed.

The Honors student has been on the Dean’s List the past four semesters and has recently been invited to join Phi Beta Kappa. Shelby is a member of Psi Chi, the psychology honors society.

What do Shelby’s parents think about her recent change in career plans? “My mom told me: ‘Do whatever you want to do, as long as you love it.'”