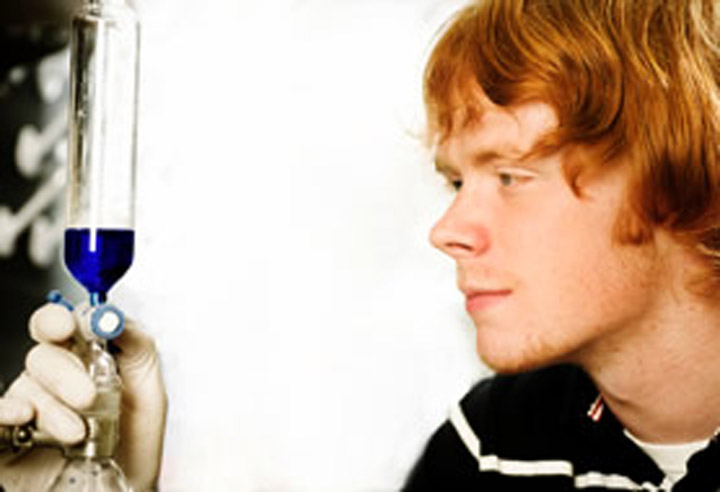 “My second semester freshman year was a defining moment for me. [That was] when I had my first taste of research at the college level.”

Andrew Rice came to Florida State University in 2007 as a freshman with an open mind. Maybe he’d study history. The subject had always interested him. He’d been a member of the International Thespian Society during high school. Perhaps he’d study theater. Then there was science. He’d always done well in science.

“My second semester freshman year was a defining moment for me. (That was) when I had my first taste of research at the college level,” said Andrew.

As a student taking Honors general chemistry, he was given the option to do research or take Honors General Chemistry II Lab. Andrew was among the small group of students who wanted to do research.

“This is an unusual program that gives talented students an early exposure to research,” said Dr. Igor Alabugin, Andrew’s professor for the class and mentor in the chemistry department.

Florida State is one of a growing number of universities that makes research opportunities available to undergraduates. “The longer a student works with a professor the more likely it is that there will be a real contribution to the research,” said Dr. Cathy Levenson, director of Undergraduate Research and Creative Endeavors.

Perhaps, a lifelong passion for research will ignite in a student given the opportunity to do meaningful work in the lab.

If the time he spent in the laboratory is any indication, research turns Andrew on. “His thirst for knowledge became evident early on when he began working much more than was required, coming in for a few hours every day (despite) his already heavy class load,” said Dr. Alabugin.

Not only that, Andrew also proved to be “a remarkable student with a genuine interest in science … and a true dedication to the pursuit of knowledge,” said Dr. Alabugin. He “had yet to take an organic chemistry class, but he quickly began to learn the names of the materials he worked on, the reactions he was assisting on, and, more important, to understand the underlying concepts of our research.”

Andrew has continued to work in Dr. Alabugin’s lab as a Directed Individual Study researcher since 2008.

In 2009, Andrew received a Mentored Research and Creativity Award through the Office of National Fellowships. This award provides the student with $1000 to conduct a summer research project or creative activity under the direction of a faculty member, which, in Andrew’s case, is Dr. Alabugin.

“(His) project is very interesting because it aims to connect the chemistry of interstellar space and genesis of important biochemical processes,” said Dr. Alabugin. “The results will provide a new perspective on the origins of life,” he said.

He will graduate in spring 2011 with a B.S. in chemistry. “I plan to go on to graduate school to study chemistry and (I hope) to get my Ph.D. and after that I hope to become a professor,” said Andrew.

Dr. Alabugin isn’t so tentative when asked about his student’s future. “Andrew will pursue a Ph.D. at a top-tier research university. (He) will have many opportunities open to him, and I have no doubt he will excel in any career path he chooses.”