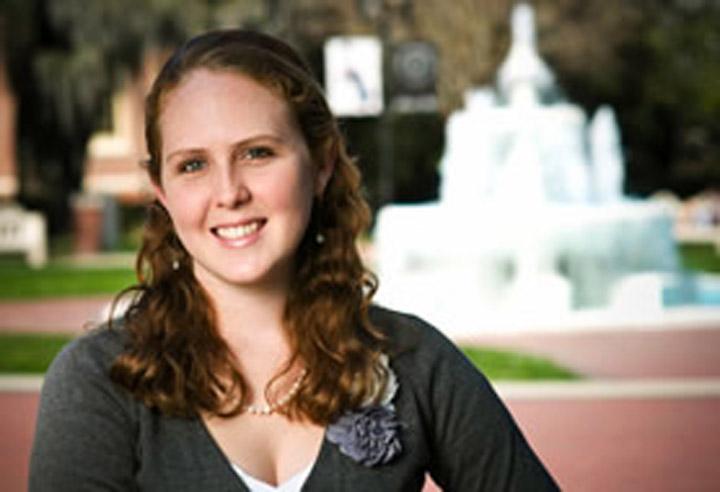 “I learned that the value of diversity is key to effective global leadership.”

Molly Brown seems as revved up about a project she’s working on for Amnesty International as she is excited about graduating at the end of the month.

“We are working very hard to get Ebenezer Akwanga to come speak,” said Molly, an Honors criminology and psychology major and coordinator of The Florida State University chapter of Amnesty International. “He was a political prisoner in the Republic of Cameroon. I heard him speak at an Amnesty conference about his experience with human rights.”

While some soon-to-graduate students are beginning to disconnect from the groups they’ve been involved in during their college careers, Molly seems slightly reluctant to do so.

“I’m really going to miss the university atmosphere and the groups I have been involved with here. It’s going to be hard to disconnect from it. I have so many close friends who have done remarkable things. They really inspire me — and make me hopeful about the future,” she said.

Hope can be hard to hold onto for a student as deeply attuned to issues of human rights as Molly. Both her academic career and her extracurricular activities at Florida State have revolved around those issues.

During her first semester at Florida State, Molly took a freshman seminar in criminology taught by Dr. Dan Maier-Katkin. “(He) introduced me to the concept of human rights. My whole Florida State experience — probably my entire future — would be drastically different if I had not taken his freshman class,” said Molly.

As a sophomore, she took his class on crimes against humanity. As a junior she took Dr. Maier-Katkin’s graduate seminar “Crimes of the Powerful.”

“About that time we began working together on her honors thesis, which (deals with) how ordinary people become involved in genocidal regimes and then return to normal lives. Think about what happened to Germans, for example, between 1933 and 1945,” said Dr. Maier-Katkin.

By the time she took Dr. Ray Ruggiero’s class in international human-rights literature Molly had “a deep knowledge of human rights. … She was able to draw from her accumulated knowledge to create an atmosphere of informed debate,” said Dr. Ruggiero.

As Molly’s knowledge grew, so did her desire to make the world a better place.

As a freshman, Molly joined Alpha Phi Omega, a national service fraternity for men and women dedicated to service leadership and fellowship among its members. In spring 2009 she served on the APO executive board, and today continues her active membership as a chair on the service committee.

Also as a freshman, salsa dancing came into Molly’s life when she began taking lessons through Azucar, the salsa-dancing club at Florida State. “Dancing salsa is the best way to cheer up after a long day. I always leave smiling,” Molly said. “I can’t imagine my university experience without it.”

Involvement in Azucar inspired a longing in Molly for other intercultural experiences. Her interest in global issues deepened. She began to look for ways to combine her academic life, her commitment to public service and her desire to travel abroad.

Last summer, Molly participated in Alternative Break Corps for the first time. She was selected for a service trip to Aranjuez, Spain, where she worked with an organization called BASIDA in a residence community for people living with HIV/AIDS.

“It was a transformative experience. We interacted with the residents and other volunteers, working with them doing their daily tasks around the community, in the laundry room or kitchen — even out on the grounds, weeding and watering,” she said. “We also helped care for residents who needed special assistance. Volunteering at BASIDA made HIV/AIDS — and the stigma attached to it — a very personal issue.”

“I was so inspired by the ideals and mission of Alternative Break Corps, I became a weekend and Spring Break site leader,” Molly said.

Earlier this year she co-led a group working with Project Lazarus in New Orleans. Project Lazarus also supports people with HIV/AIDS who can no longer live on their own because of illness, homelessness or substance abuse.

During the recent Spring Break she was in Memphis, Tenn., working with the Mid-South Peace and Justice Center on its community gardening project and also at the Manna House, a house of hospitality for homeless people. “For some marginalized groups in society, being treated with basic human dignity is hard to come by — but not at Manna House. The place was overflowing with happiness, goodwill and respect for others.”

Florida State’s Center for Global Engagement selected Molly to attend the Florida International Leadership Conference in February. “This is an experience I will carry with me for the rest of my life. … I met students from all over the world. … I learned that the value of diversity is key to effective global leadership,” she said.

Through Florida State’s International Programs, she studied in Dubrovnik, Croatia. She was interested in learning about the ethnic cleansing that took place in the region during the Yugoslav Wars. During the program, she presented research on the United States’ recognition of Kosovo.

This and her earlier international and service experiences led Molly to apply for the Peace Corps. “I would love to serve in Eastern Europe, but I will be happy to serve anywhere. Right now, I just have to wait to see what happens.”

Meanwhile there’s graduation to think about. “My older sister and I are graduating together. It makes the experience even more special since we are very close and have been through so much together.”

When asked where he thought Molly would be in 10 years, Dr. Maier-Katkin said, “Perhaps she will be working for the Foreign Service. She’ll still be too young to be an ambassador, but I wouldn’t bet against her getting there.”