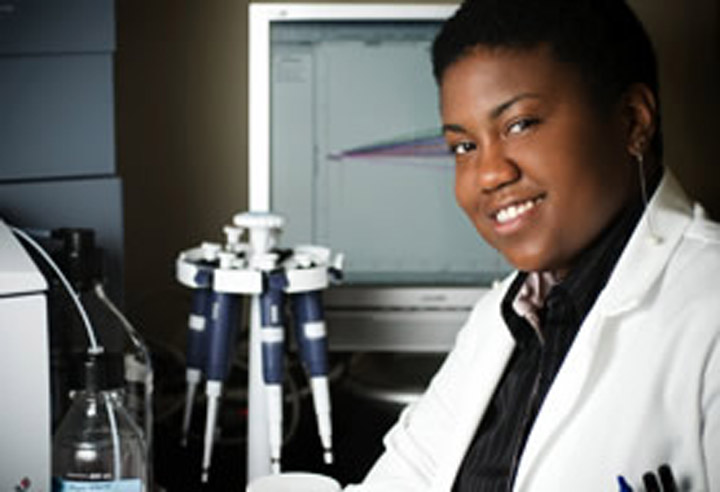 “When I was in third grade, I came home with straight B's on my report card. My parents grounded me.”

When Patrice Williams proposed majoring in biomedical engineering and music education, she was told it wasn’t possible. It would be a mistake to take on two such rigorous courses of study. “Every college I applied to told me that it was not possible … I would have to choose one or the other,” she said.

Perhaps a bit deflated by this information, Patrice reconsidered her options. She knew she had a strong background in music, but worried that she might not be as strong in science. In the fall of 2004, Patrice began her FSU career as a music-education student.

She was doing well in music education but wasn’t completely satisfied. Should she go into music therapy, study German, take up biomedical engineering? And then it hit her: She missed math and science.

“I changed to a B.A. in music and became a biomedical-engineering major.” Later her calculus professor, Dr. Philip Bowers, suggested she go for a biomathematics degree because she wanted to go to medical school … and had a strong interest in mathematics. The following semester she switched majors.

This fall Patrice will graduate with a B.A. in music and a B.S. with Honors in biomathematics.

These days, Patrice is as comfortable in the lab as she is at the piano. Working with her mentor, Dr. Ewa Bienkiewicz, for a year and a half, she has been conducting experiments that could lead to treatments for Alzheimer’s disease. The work Patrice is doing could help determine a reversal or prevention of the disease.

Patrice came to Dr. Bienkiewicz’s attention when she was looking for a job in the biomedical-sciences department. “I was immediately interested in her because of the spectroscopy experience that she had acquired … I thought she would be perfect for the studies of Alzheimer’s disease I was pursuing in my laboratory,” said Dr. Bienkiewicz.

Dr. Bienkiewicz was impressed by the way Patrice dove right into the research project. “I thought Patrice was a very special student with a lot of potential … matched by her enthusiasm and willingness to put (her) best effort into everything she was doing.

Patrice has a paper in preparation on Alzheimer’s studies. “Some professors would just write the paper themselves, but Dr. B is giving me a chance to learn by doing it myself.”

Patrice’s parents came to the United States from Jamaica to make certain their children would have opportunities they had not had. “My parents were very strict with me, especially in regard to school. … When I was in third grade, I came home with straight B’s on my report card. My parents grounded me. … They always had high standards for me.”

Being on the Dean’s list every semester is only one of Patrice’s many academic achievements.

In 2009, she was selected as one of 12 students from around the country to travel to the Republic of Ghana with the National Institutes of Health’s Minority Health and Health Disparities Research Training Program.

A convergence of opportunities presented itself when she arrived in Kumasi, Ghana’s second largest city. Patrice was invited to attend a meeting with the head of oncology from Komfo Anokye Teaching Hospital and traditional Ashanti healers.

The physicians and traditional healers long had been at odds, each believing the other incompetent. At this meeting, the oncologist acknowledged the efficacy of some of the healers’ methods while urging them to recognize modern medicine’s value in treating serious diseases such as cervical cancer, which is in high incidence among African women.

Patrice was thrilled to be part of this important meeting. The idea that modern medicine and herbal therapies could be complementary components in the treatment of disease made sense to her.

Growing up the child of Jamaican parents, she was often given medicinal teas when she was sick. “We didn’t go to the doctor very often. … I thought tea could cure anything.”

Right now, she’s keeping busy with classes and research while waiting to find out if she gets the Fulbright Scholarship she has applied for. The doctors at Komfo Anokye Hospital have invited her to return to begin research on non-traditional remedies. She will know by June if she will be spending nearly a year back in Ghana.

After graduation this fall and the hoped-for return to Africa, Patrice might slip in a Master’s degree in biotechnology with a concentration in molecular targets and drug discovery technologies offered by Johns Hopkins University and the Center for Cancer Research/National Cancer Institute before starting med school. The master’s is a two-year program, Patrice said, “but I think I can do it in a year.”

It seems unlikely anyone who knows Patrice would argue.