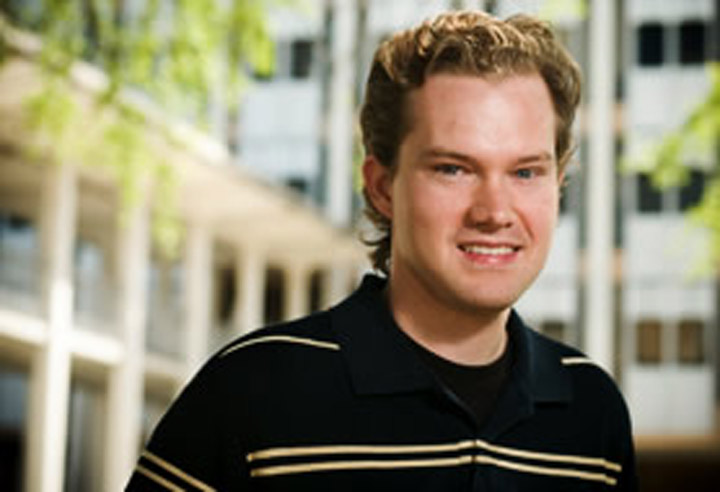 “I always strive to keep a balance between body, mind and spirit.”

Jared Doster came to The Florida State University because of its welcoming atmosphere — and its “amazing research-based physics program. …It’s certainly the best physics department in the Southeastern United States.”

Recognizing there were great opportunities available to him at Florida State, he quickly seized one. In the spring of 2007, in search of a research project, he approached Dr. Ingo Wiedenhoever, associate professor of experimental nuclear physics.

“While explaining the possible project to him, I pointed out a complicated set of
electronics involved in regulating the operation of the accelerator. …He asked for some time to sketch the setup and try to understand its function,” said Dr. Wiedenhoever. “This demonstrates Jared’s gift and character for research. He attacks the unknown head-on.”

In 2008, Jared was awarded an Undergraduate Research and Creative Activity Award through the Office of National Fellowships. This $4000 award supports students’ summer research or creative activity under the direction of a faculty mentor with whom the award is shared. Jared’s faculty mentor is Dr. Wiedenhoever.

The award made it possible for Jared to spend the summer of 2009 “calculating nuclear reaction rates of aluminum in supernovae,” as he explains it.

“This research is valuable to the physics community because aluminum is easily detected in our galaxy,” said Doster. “If we understand how that aluminum was created — through nuclear reactions — we will better understand supernovae in our galaxy.”

Dr. Wiedenhoever was impressed by Jared’s presentation of this research. “Jared has proven to be an excellent speaker and communicates his results very elegantly and understandably,” he said.

Jared has been on the Dean’s List every semester of his college career. In 2009, the university nominated him for a Goldwater Scholarship, which aims to support a continuing source of scholars to work as scientists, mathematicians and engineers. Jared is a member of Golden Key International Honour Society and Sigma Alpha, Phi Kappa Phi, Phi Sigma Theta and The National Scholars honor societies.

While it is clear that Jared is serious about academics, he is equally serious about living a well-rounded life. “I always strive to keep a balance between body, mind and spirit.” Faith “is at the top of my priority list.”

Music is also important in Jared’s life. A pianist since childhood, he decided to study organ while at Florida State. “I think it was a film about Liszt that got me thinking about playing the organ. …Many of the great composers — Bach, Handel — played the organ, and, of course, composed for it.”

Also deeply interested in human behavior, Jared would like to do neuroscience research, perhaps go to medical school and ultimately to become a research physician.

Jared says the success he has achieved at Florida State “is simply a result of hard work and the influence of my family. …My family — father, mother, brother and sister — have given me talents and abilities I now carry with me. Each of them was an integral part of my family environment and who I am.”

“I keep being impressed by his multiple talents. We can expect great things from Jared Doster, ” said Dr. Wiedenhoever.