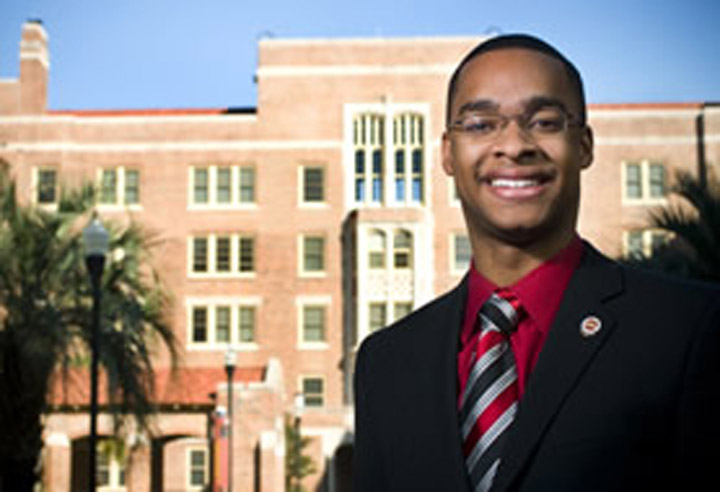 “This is a big campus. I try to make it feel small by helping students get connected…”

Mike Jones never doubted he’d attend Florida State University. “My mother is an alumna who majored in criminology.” Despite living close to Gainesville, “I began to show Seminole pride in high school. I knew I was coming to this institution.”

Mike is passionate about Florida State. “I want to share the love I have for this university,” he said. “This is a big campus. I try to make it feel small by helping students get connected and know about the resources available to them.”

His passion has led him to a career path he couldn’t have anticipated.

He remembers feeling a bit intimidated and out-of-place when he arrived in fall 2006. When an opening for a receptionist opened up at his residence hall, he decided to apply for the job. It seemed like a good way to meet people and to begin to feel more at home — and he was right.

Through the job, Mike created a network of friends and began to get involved in residence-hall government and the Inter-Residence Hall Council. During the spring semester of his sophomore year, an opening for a resident assistant, or RA, opened up in Gilchrist Hall — Mike got the job.

Mike soon discovered that his predecessor had a management style different from his. “It was a little tricky at first because I was very much by the rules,” but it didn’t take long for his floor mates to accept him in his new role.

That was 2007. Now a senior, he is completing his fifth semester as an RA. “Every year has been a totally new and different experience,” he said.

Patrick Heaton, director of New Student and Family Programs, met Mike when he applied to be an orientation leader. “Mike loves people. He is motivated by personal connection, and he’s action oriented.”

“He is a born politician. He understands the importance of taking time to connect with people, being an active listener and responding to their needs with compassion and respect,” said Heaton.

Mike has been on either the President’s List or the Dean’s List every semester of his college career while maintaining a 3.84 cumulative GPA. He is a member of Phi Kappa Phi, Omicron Delta Kappa and Beta Gamma Sigma honor societies and was awarded the 2008 and 2009 College of Business Bank of America Scholarships.

“He always seems to be so involved in school and FSU activities that I marvel at his ability to stay calm and happy — and always energetic,” said Pamela Perrewe, Eminent Scholar in the College of Business, one of Mike’s professors — and a mentor.

Mike always thought he wanted to run a successful business, but with graduation looming and a job offering to consider, he began to have second thoughts about his next step. His mentor, Khorey Baker, Residence Coordinator of Broward, Landis, and Gilchrist Halls, suggested he look into getting a master’s in higher education and student affairs.

“I thought, ‘Yeah, that sounds right.’ I love what I have been doing here. Maybe I can have a career working at a university,” Mike said.

He’s applied and been accepted to four schools that offer a master’s in higher education and student affairs. He seems characteristically relaxed about the next step. He’ll visit the schools and make his decision. “It’s funny how one thing has just led to another.”