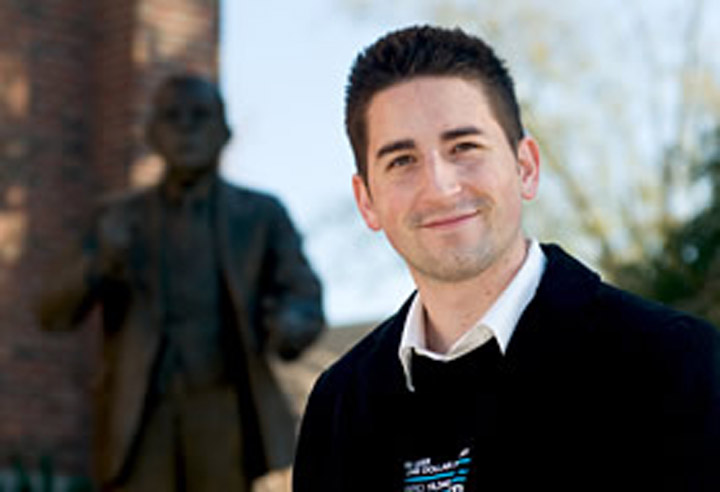 “[The experience of becoming a Service Scholar] was one of the greatest of my life.”

In 2007, when he came to Florida State University as a freshman, 2010-11 Student Government Association President Dustin Daniels was no stranger to public service. As a high-school student he had worked with many service organizations and was a natural candidate for the university’s Service Scholars Program.

Each year incoming freshmen with a background in community service are selected to attend the four-and-a-half-day Service Leadership Seminar (SLS) at which they learn about service opportunities available at Florida State, while building relationships with other like-minded freshmen. Each year, two to three students are selected from SLS to join the FSU Service Scholars Program. Dustin was one of these students.

The experience of becoming a Service Scholar “was one of the greatest of my life,” he said. It has proven to be a springboard for “countless opportunities both at FSU and elsewhere.”

Through these connections Dustin became involved in the Global Peace Exchange (GPE) — founded at Florida State University in 2006 — which allowed him to work on development projects in rural Rwanda, as well as visit many countries throughout East Africa. These experiences and the leadership skills fostered through the Service Scholar Program were influential in his successful run for the SGA presidency.

In May 2008, Dustin traveled to Gitarama, Rwanda, with GPE, where he established ties with a rural university and helped work with a local organization to build supplemental housing for orphans. While there, he established an English Conversation Club for Rwandan university students. The project was practical and timely, and it required few monetary resources.

This club became even more important after the government of Rwanda adopted English as the official language later that year. “The policy has the potential to foster inequality in the country. Rwandans who don’t speak English will become second-hand citizens,” said Dustin.

The center has become a hub for the planning and implementation of Rwandan student-led service projects. In this way, Rwandan students are given a chance to create change and contribute to the development of their country, an idea that was very important to Dustin’s vision.

The idea was to establish something sustainable. “I wanted it to be something that would work if we never came back to Rwanda,” said Dustin.

Dustin came to FSU with the intention of pursuing pre-med studies, but his international-service experiences changed his mind. In spring of 2011, he will graduate with a degree in Economics and International Affairs.

Dr. Claudius Mundoma, director of the university’s Physical Biochemistry Facility, Institute of Molecular Biophysics and faculty advisor for the African Student Association, has gotten to know Dustin well through activities sponsored by ASA, the International Scholars Center and One Here One There, a student initiative complementing the United Nation’s Millennium Development Goals for basic education.

Dr. Mundoma calls Dustin “a social entrepreneur.” He “does not believe that he is an outsider to the world.” Dustin is relentless “in viewing life’s realities” and takes a pragmatic approach to dealing with those realities.

Enthusiastic about the outcome of the recent Student Government election, Dr. Mundoma said, “Dustin has a unique set of communication skills, which will prove invaluable as a student leader. … His election as student body president is a fitting tribute to the body of work he has done across campus.”

How will the service work Dustin has done in Africa and other countries influence his work as student body president? “I think my service experiences abroad have opened up my understanding of the world’s issues. These experiences will push me to work to link students to opportunities that allow them to advance toward a greater good (using) the vast resources that we have as a university community,” said Dustin.

Often the focus of the student body president is “solely on how to benefit Florida State,” said Dustin. “My ambition is to expand this standard to include our community and communities abroad.”

Dr. Mundoma believes Dustin can achieve that ambition. “People like Dustin create new paradigms, new realities and new frontiers. I am confident that he will be a catalyst in those transformations.”