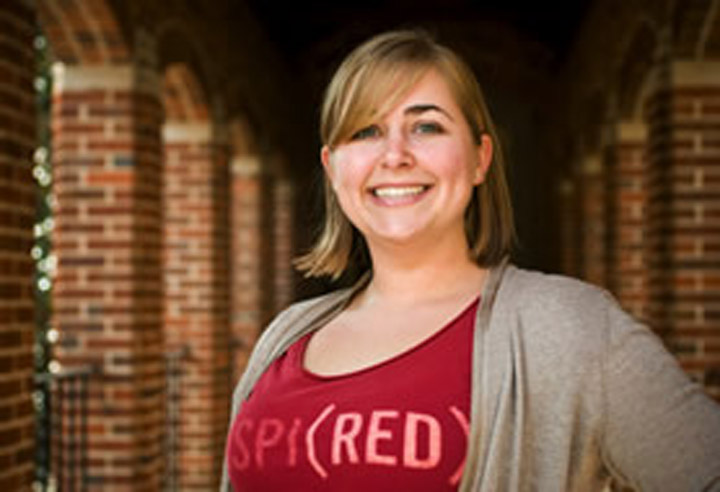 When Marie LeBlanc decided to come to Florida State, it’s unlikely that she imagined her college career would include working in a Buenos Aires soup kitchen and having her face painted by a Shuar tribesman in the Ecuadorian rainforest. But these and other extraordinary experiences characterize this senior Service Scholar’s time at FSU.

It is obvious Marie was looking for more than a degree when she chose Florida State. She wanted to “find a university that valued diversity … of experience, background, culture, passions.” And, she knew she wanted travel to be part of her undergraduate life. “Florida State was an obvious choice for that reason as well. Our International Programs are consistently ranked in the Top 10.”

Attending the Service Leadership Seminar sponsored by the Center for Leadership and Civic Education — a four-and-a-half-day initiation for the Service Scholars program — as an incoming freshman “put things in perspective,” Marie said.

Each year about 12 freshmen with an outstanding record of service and leadership are selected to become Service Scholars. These students receive a $2,400 renewable scholarship annually. The program is designed to prepare students to become leaders on campus and in their communities after graduation.

“I knew I was interested in international affairs, but the seminar showed me how what I did academically (and) what I did for fun, could support my interest in helping others.”

At the seminar she learned about the wealth of service opportunities — local and international — available to FSU students.

Marie’s first trip was to Costa Rica with Beyond Borders in May 2007. Beyond Borders introduces students to a culture different from their own through social, service and academic activities. The following March, Marie taught English in the Dominican Republic through the Alternative Break Corps, which offers students a service-oriented spring break.

The summer of 2008, Marie spent a month in Paris studying French through Florida State’s International Programs. She studied at the university’s Study Centre in London during the fall semester.

As a member of the Alternative Break Corps, Marie spent spring break 2009 in Ecuadoran rain forest living with the indigenous Shuar tribe and spring break 2010 in Cuernavaca, Mexico.

Marie was selected for the Summer Serviceship Program in 2009. This program, offered through the Center for Leadership and Civic Education, makes it possible for an undergraduate to spent 8 to 12 weeks working full time for a non-profit agency.
In Marie’s case, it was a soup kitchen, Comedor Madre Camila’s, in Buenos Aires.

Laura Osteen is Marie’s mentor through the Center for Leadership and Civic Education and its program co-director. When Marie was a freshman, Osteen recognized her to be “a mature, smart young woman … interested in learning, making a difference and understanding the world.” Four years later, Osteen says Marie “has proven to have integrity and depth.”

Marie demonstrates those qualities in the blog she wrote while she was in Buenos Aires. “I’ve observed … that those who experience hunger and homelessness in Argentina are not that different from those who experience it in the States. The effects of living in the street are easily read on a person’s face, and being treated with respect by another individual is often the greatest gift that one can give.”

It’s clear that her academic life as an International Affairs student, her study of French and Spanish, and her travel and service have well prepared Marie for her chosen career in international development working for poverty relief in Latin America.