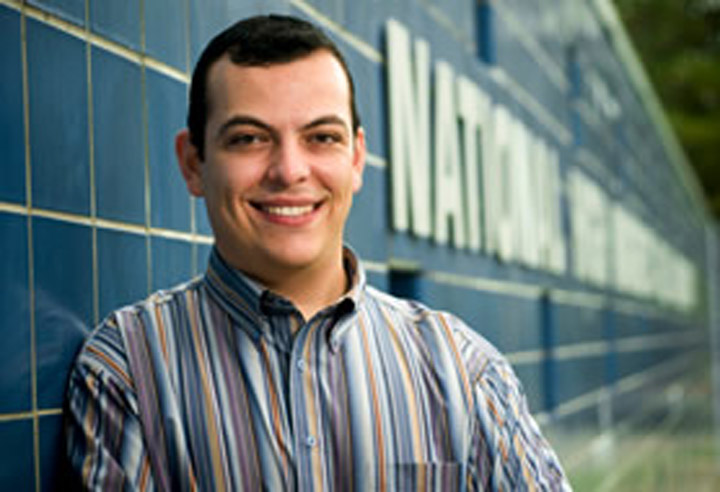 “I knew this was the right place to fulfill my dreams.”

George Bou-Assaf had always known he wanted an Ph.D. — and when he decided on a career in chemistry he knew that would mean leaving his country.

“Advanced resources and good Ph.D. programs are limited in Lebanon. That’s why I decided to leave my family, friends and traditions behind and look toward the future,” he said.

So, after earning a B.S. in chemistry from Lebanese University in Fanar, Lebanon, George applied to universities in France and the United States, including The Florida State University.

A friend recommended Florida State because of its “excellent chemistry department, the renowned faculty… in addition to a unique, one-of-a-kind facility like the National High Magnetic Field Laboratory.…I knew this was the right place to fulfill my dreams,” said George.

It seems George was right. He was accepted at Florida State as a graduate student in biochemistry in 2006 and awarded an assistantship. He now conducts his research at NHMFL in the laboratory of Dr. Alan Marshall, an international figure in the field of mass spectrometry.

“Dr. Marshall is a wonderful person, humble and modest. …He wins big awards frequently. …He is so knowledgeable and approachable. …He has more than 450 publications (and these are peer-reviewed ones),” said George.

He also has praise for the interdisciplinary nature of the biochemistry program and the opportunity students have to rotate through the labs of three professors at the beginning of their graduate studies. “I think other disciplines could learn from this model,” George said.

As a Ph.D. candidate, George was required to teach undergraduate chemistry. He approached it as a challenge. “Chemistry is not a preferred subject for many undergraduate students, yet many are required to take it. …I believe it is up to the teacher to make students interested in the subject.”

He taught for five semesters. “Teaching is the best way to get to know your subject because it forces you to find a way to explain complex ideas in every day language.”

Is there a symbiosis between research and teaching? Dr. Marshall thinks so. “I have found that the best researchers have the capability (not always pursued) to be the best teachers, because in research, one has to explain the outcome to oneself before one can explain it to others. George has both qualities — he gets good results, and takes the time to find the best way to get them across to others, with diagrams, analogies, etc.,” he said.

“I love teaching. …I wanted to excel at it,” said George. Apparently he did. “My students nominated me for the FSU Outstanding Teaching Assistant Award in 2007 and 2008. I won it in 2008.”

George is using mass spectrometry to study protein-to-protein interactions “particularly the troponin complex, which is involved in the regulation of muscle contraction,” he said. “Irregularities in this complex cause several cardiovascular diseases.”

To fund his research, George applied for and won an American Heart Association pre-doctoral fellowship.

George will finish his Florida State career in the fall of 2011 with a Ph.D. in biochemistry. He plans “to find a position in an academic, governmental or industrial institution” and then become a university professor. He would ultimately like to work for a drug company. “Developing a drug that cured a disease would be great.”

George admits to be somewhat of a perfectionist. Dr. Marshall sees that as crucial, “(His) research involves ultrahigh-precision measurements. …Ergo, ‘perfectionism'” is not an option — it’s a requirement, and he has been up to the task.”