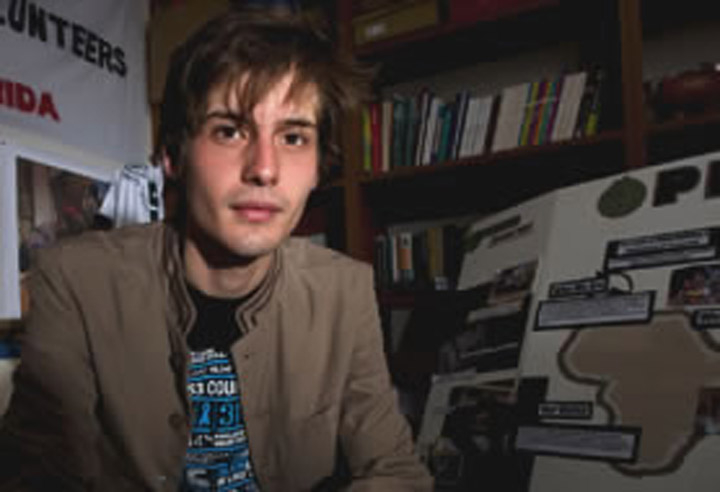 “…instead of organizing a one-time trip for myself, I decided to create an organization that would allow future generations of students to do exactly what we did in Ghana.”

Alexander Merkovic-Orenstein is co-founder of the Global Peace Exchange, which he launched at The Florida State University in 2006 to create “a new civilization of humanity” by fostering mutual cooperation, understanding and peace throughout the world. In a short time, The Global Peace Exchange has grown to more than 500 student members among partner universities and operates in five countries.

In recognition of his efforts to provide assistance to people in developing nations, as well as his academic excellence, he was selected for one of the most prestigious honors an undergraduate can receive.

Merkovic-Orenstein, a Middle Eastern studies major from Tequesta, Fla., was named a 2009 Truman Scholar — one of only 65 selected from throughout the United States and its territories each year. With the scholarship, he received $30,000 to study at the graduate school of his choice.

In 2006, Merkovic-Orenstein and two of his fellow Florida State students — Nick Fiore and Maria Kuecken — co-founded Global Peace Exchange, an organization designed to link universities with government agencies in order to help young people perform international humanitarian service related to their academic major or other expertise. Global Peace Exchange acts as an official partner of the United Nations, the governments of numerous countries, and a host of international colleges and universities.

“Through Alex’s humanitarian work and leadership, thousands of people will know a better life than they otherwise would have,” said Florida State University President T.K. Wetherell. “We are extremely proud of him for his academic accomplishments, for his strength of character, and for the example he provides for others.”

Merkovic-Orenstein, 20, talked about his motivation for starting the Global Peace Exchange:

“When I was 16, I tried to drop out of high school to go work with the post-tsunami relief effort in Sri Lanka,” he said. (The 2004 Indian Ocean tsunami was one of the deadliest natural disasters in recorded history, killing more than 225,000 people in 11 countries.) “Being underage and very much unqualified, I was understandably rejected by most (organizations providing relief efforts). So I resolved to begin my career in humanitarian aid as soon as I turned 18 and had some kind of skills to offer.

“When that time rolled around and I was a freshman at FSU, I found that the school had no organizations that did relief trips,” he said. “I also realized that there probably were a good number of students who, like myself, wanted to volunteer abroad but couldn’t find the means. So instead of organizing a one-time trip for myself, I decided to create an organization that would allow future generations of students to do exactly what we did in Ghana.”

In that 2007 trip to Ghana, Merkovic-Orenstein and other Global Peace Exchange students worked mainly with ex-child soldiers and refugees from Liberia’s civil conflicts. At the Buduburam refugee settlement, they provided some 2,000 treatments against intestinal worms, supported scholarships for ex-child soldiers, and created and supported initiatives for vocational training and education of many of the camp’s less fortunate.

Merkovic-Orenstein has also traveled twice to Rwanda, where, among other things, Global Peace Exchange helped set up a computer lab at an orphanage and presented Rwandan President Paul Kagame with an honorary doctorate of law from The Florida State University.

Having completed his undergraduate studies at Florida State in just three years, Merkovic-Orenstein now attends the School of Oriental and African Studies in London.

“Alex is truly the embodiment of the Truman mission,” said Meredith Simpson, former director of Florida State’s Office of National Fellowships, which helps students pursue nationally competitive scholarships and fellowships. “His energy, compassion for others and ability to think globally make him a unique and successful student. He will continue to make a difference in a lot of people’s lives.”

The Harry S. Truman Scholarship Foundation awards merit-based scholarships to college students who plan to pursue careers in government or elsewhere in public service. This year, the foundation awarded approximately 65 scholarships on the basis of merit to junior-level students at four-year colleges and universities who have extensive records of public and community service and have outstanding leadership potential and communication skills.