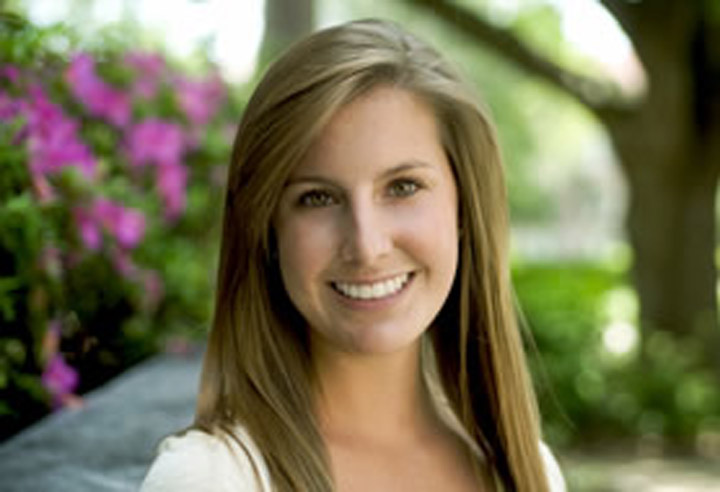 “I hope to work for an organization that desires to bring real change into this world where it is most needed.”

“When I first visited Florida State University,” Marlee McCleary reflects, “I felt like I belonged.”

As a student at Florida State, Marlee soon discovered another place where she belonged: the Center for Leadership and Civic Education. She has volunteered with the Hunger and Homelessness Cadre since her freshman year, a group that works with different organizations to increase awareness of local, national, and international issues of hunger and homelessness. “The programs we put on give students an opportunity to experience the inequalities of the world’s food supply.” Marlee has hosted hunger banquets, volunteered with the Big Bend Homeless Coalition’s HOPE community, and mentored high school students at the 2009 South East PeaceJam conference.

She is also helping to lead the Without Words Program, which brings awareness to issues of social justice in Tallahassee and around the world. “By being a part of this program I am able to help students and faculty experience the social justice issues we portray in a new light.”

A leader in the classroom as well as in the community, Marlee is a member of the Honors Program, Phi Eta Sigma Honor Society, and the Student Council for Undergraduate Research and Creativity. She has been named to the Deans’ List every semester.

As an International Affairs major, Marlee has pursued opportunities to learn about social justice issues abroad. Marlee was awarded a Serviceship from the Center for Leadership and Civic Education in 2008 that supported her travel to Tanzania, where she volunteered with an organization called International Health Partners, US-Tanzania. She stayed in the compound of a small, non-profit clinic in a rural village outside of the city of Mwanza, called Nyakato. Marlee valued the opportunity to immerse herself in an entirely different culture and learn about how Tanzanian healthcare operates. She worked in a clinic, traveled to hospitals, and shadowed the organization’s director. “The time I spent in Tanzania changed my world view and increased my appreciation of non-profit work. I developed an increased sense of responsibility and independence during my time there.”

Last summer, she studied abroad with International Program’s multi-location Human Rights Program. “I knew I wanted to study abroad, and I was impressed with FSU’s International Programs office and the variety of programs they offered in just about every location imaginable.” With the Human Rights Program, Marlee traveled to Strasbourg, France, and The Hague, The Netherlands, to visit international courts and learn about human rights laws. She observed court proceedings and experienced the international and European justice system first hand.

Undergraduate research has become an important part of her academic pursuits at Florida State. Marlee was selected to assist Dr. William Moore of the Political Science Department on a project called “Ill-Treatment and Torture.” She works with a doctoral student and other undergraduate students to analyze Amnesty International documents regarding torture incidences. The Office of National Fellowships granted her a 2009 Undergraduate Research and Creative Endeavors Award to study the effects of microfinance on Kosovar women. This award funded her site research over the summer in Kosovo, where she examined “whether or not microfinance is truly an effective means of empowering women, especially in a post-conflict situation.”

She recently presented the results of her summer research at the Undergraduate Research and Creativity Award Symposium, and she was also selected to present a summary of her research to the Florida State University Board of Trustees. She is currently continuing her research on women and microfinance for her Honors in the Major Thesis.

After her graduation from Florida State, Marlee plans to intern with a non-profit human rights organization in preparation for entering a graduate program in international human rights. “Ideally I’ll be working abroad so that I can continue to experience different countries, their people and their cultures. I hope to work for an organization that desires to bring real change into this world where it is most needed.”