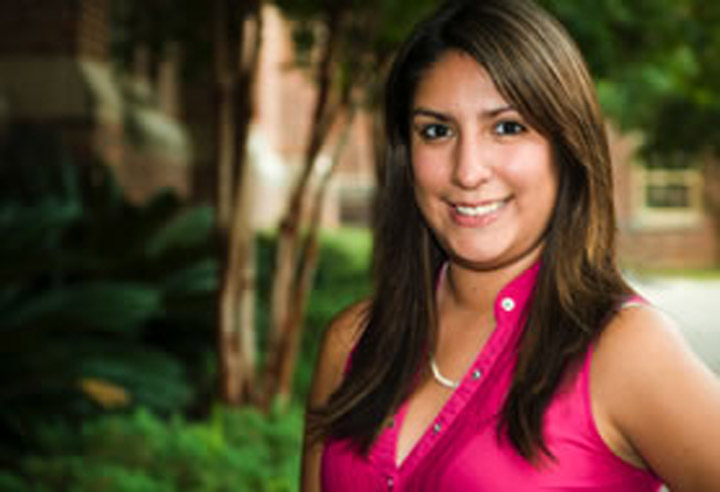 As a sophomore at The Florida State University, Pamela Diaz was selected as one of three underclassmen on a 15-member advertising team that competes in regional and national contests. She was a junior when she became the project manager.

Along the way, her teams garnered two ADDY gold student awards locally and two first place honors and four special awards in the Regional National Student Advertising competition. Both teams competed with about 200 schools nationally, with the 2008 Florida State team taking 8th place at an Atlanta conference and the 2009 team winning 7th place at a Washington, D.C., conference.

“I have been so lucky,” Diaz said. “Florida State’s communication program offers a great balance of theory and hands-on experience.”

Diaz, who has a double major in public relations in the College of Communication & Information and Spanish in the Department of Modern Languages and Linguistics in the College of Arts & Sciences, also won scholarships from Advertising Women of New York and the Tallahassee chapter of the American Advertising Federation (AAF).

The AAF awarded her the “Most Promising Minority Student/Home Depot Scholarship” in 2008, and Florida State gave her the “Outstanding Academic Achievement Award in Public Relations” in 2009.

Diaz also has held four internships, including one at mcgarrybowen, an advertising agency in New York City. Her other internships have been at the Kidd Group and Salter Mitchell, both in Tallahassee, and Main Sail Video Productions in Fort Myers.

“I have had so many amazing experiences through Florida State and gotten to meet people from major advertising agencies,” Diaz said. “I’ve been able to work with my professors on many projects, and they always care about what I’m doing and find ways to help.”

The 2009 national advertising competition challenged students to address a social issue via public advertising for the first time. The goal was to promote positive behavioral change to prevent dangerous over-consumption of alcohol among college students.

Diaz said the team’s study at Florida State used a 30-question survey of 3,000 students with the help of Barry Sapolsky, the Jim E. Kirk Professor of Communication. For some of the research, the team went to various settings, ranging from tailgate parties to local bars to interview students about their drinking habits.

The study found that students’ drinking behavior should no longer be defined simply by how often they drink, because they might not drink alcohol Sunday through Thursday but drink a lot on weekends. Motivation plays a key role in campaigns to change drinking behavior.

An analysis of variables led the team to define four groups of student drinkers based on their motivation: experimenters, who are mostly freshmen and underage; relaxers, usually upperclassmen who have a work-hard, play-hard mentality and save their drinking for weekends; socializers, most likely females who tend to do more pre-event and post-event drinking; and thrill seekers, primarily males and the most at-risk group.

Diaz’ team developed a 30-page proposal with creative samples aimed at changing behavior by showing how drinking in excess affects other actions or passions.

“Being in charge meant I was a lot more involved in 2009,” Diaz said. “It meant a lot to me. It was my baby. Sometimes, we worked 40 hours a week on the details. Everybody thought we were crazy.”

To support such intense work, the college has a designated “Ad Lab” with food, computers and couches for the team, under the direction of Barry Solomon, associate in communication. “He knows how much work goes into a campaign,” Diaz said. “He has seen me grow as a student. He jokes that I didn’t talk a lot the first year but I changed.”

Diaz was born in Mexico and was 10 years old when she moved with her mother to Fort Lauderdale, then Fort Myers. She graduated from the magnet program at Cypress Lake High School, where she was executive director of a daily news show in Spanish.

Her goal is to combine her multi-cultural abilities and her communication skills to work for an advertising agency with a global account.