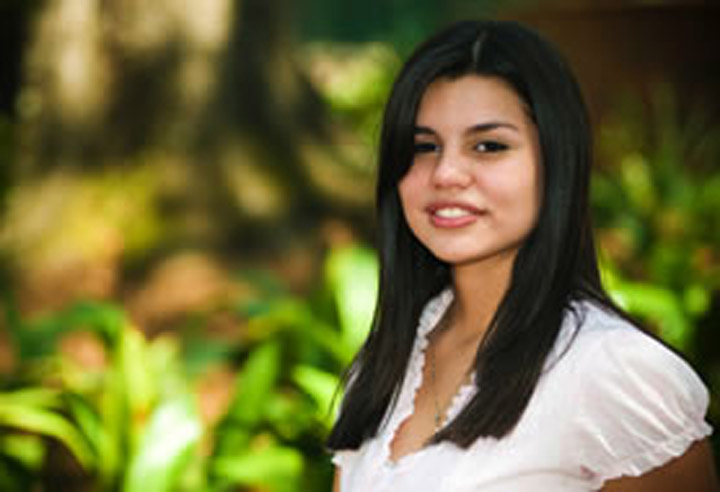 “The C.A.R.E. program at Florida State provided me with a foundation that smoothed my transition into college and helped me become the student I am now.”

As Lesbia Castro sought to narrow her interests at The Florida State University, she found a way to combine psychology, criminal justice and law by doing hands-on research with a professor.

She joined a team set up by Dr. Joyce Carbonell, a professor in the Department of Psychology and Director of Women’s Studies, to determine what difference a specialized mental health court makes in the lives of adult defendants diagnosed as mentally ill.

“The mental health court is actually relying on the data we’re collecting to see the impact of the program and whether to revise it,” Castro said. “It feels like I’m really helping the community.”

Mental health courts are relatively new, and the one in Tallahassee started last year. The goal is to channel mentally ill offenders into treatment programs or facilities rather than incarcerating them in jails not equipped to handle their illnesses.

For her independent project for Honors in the Major, Castro has been looking for patterns in gender, mental illness and crime. She often can be found in the Tallahassee courthouse collecting data as judges, pre-trial specialists, case managers, probation officers and clinicians review cases.

The Center for Academic Retention and Enhancement, designed to provide an alternate admission process for first-generation college students or students who are financially disadvantaged, starts with the Summer Bridge Program for incoming freshmen. Students meet mentors and professors, attend workshops on school and life issues, and take two courses for college credit.

“I am a firm believer that enrolling in college during the summer with C.A.R.E. was the best thing I could have done,” said Castro, who also has earned minors in criminal justice and sociology. “Not only do you get a head start with credits, you also get a real feel of the campus without being too overwhelmed.”

Castro’s parents are from Nicaragua and she was born in Miami. She is the first person in her family to attend college and expects to graduate in Spring 2010.

In her first year at Florida State, she was named to Phi Eta Sigma, a national honor society for freshmen. Now she is a member of the prestigious honor society Phi Kappa Phi, the Golden Key International Honor Society, and two honor organizations in her majors, Pi Sigma Alpha in political science and Psi Chi in psychology.

In addition, she is community service/college success chair for the Florida State chapter of the National Society of Collegiate Scholars. She persuaded members to join a 5K Walk for Mind America to raise awareness of mental illness and organized her group to help collect donations for the homeless, but her work to expand the one-day College Success event for underprivileged Tallahassee-area eighth graders really captures her heart.

“I wish someone had been there to show me the importance of college at that age,” Castro said. “It is sad to say that I was already a senior in high school when I realized I knew nothing about colleges.”

She plans to use College Success to put more emphasis on C.A.R.E. and the admissions process at Florida State. She’s been working in the Admissions Office since her freshman year, when a C.A.R.E. mentor helped her find an on-campus job.

“Professors here at Florida State are very open and honest and more than willing to help students,” she said.

She added descriptions of two: Carbonell, who is “really passionate about her work and has never said no” to educational ideas, and Daniel Maier-Katkin, a professor in the College of Criminology & Criminal Justice who has a “way of teaching that opens your mind to points of view that are not apparent.”

“Ms. Castro is a bright, conscientious and hard-working student with whom it is easy to work,” Carbonell said. “She an active participant in the lab and does not hesitate to ask questions or make suggestions. Her research will be a contribution to our understanding of what works in mental health courts and specifically, for whom it works.”

Castro plans to attend graduate school but still doesn’t know if she wants to pursue clinical psychology or a law degree, so she has been studying to take both the Graduate Record Exam and the Law School Admissions Test.

“I’ve been exposed to a lot of things,” she said, “and my parents are proud of me.”