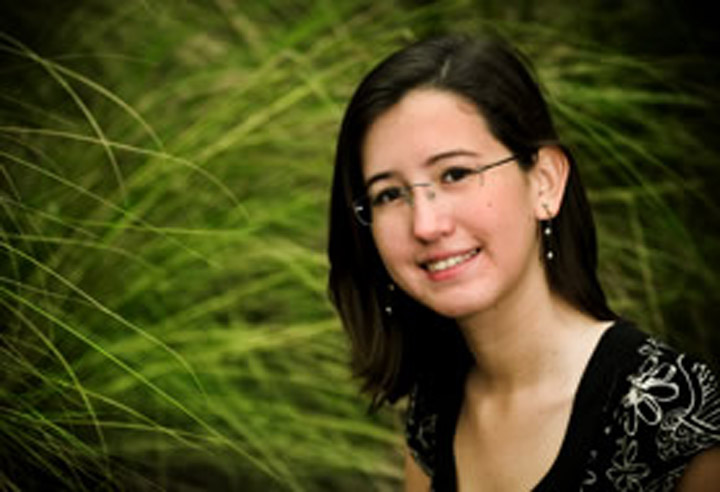 “When I began at Florida State, I would have been very, very lost without the Colombian Student Association. I don't think I would have lasted a semester.”

As a student at The Florida State University, Luisa Rubio has been slicing up freshwater flatworms — average length 8-10 mm, less than half an inch — for her research on regeneration.

She used part of her $1,000 Undergraduate Honors Thesis Grant to buy the 50 or so worms she needed for her two-year study.

She also won a prestigious fellowship to spend 10 weeks last summer studying coastal pollution in the Mission-Aransas National Estaurine Research Reserve in Texas. And, in her third year at Florida State, she serves as a teaching assistant in the Department of Biology in the College of Arts & Sciences.

But she says she wouldn’t have had the confidence to take advantage of such opportunities without Florida State professors who have been her mentors and the Colombian Student Association that made her feel so welcome at the university.

“It’s such a big university, sometimes it’s hard to find your place,” Rubio said, “You just have to get involved. Once you do, you have so many opportunities. Florida State has given me the base for my career in marine biology.”

A native of Colombia who moved to Miami during her high school years, Rubio serves as vice president of the association. She expects to graduate in Fall 2010 and plans to earn her doctorate.

“When I began at Florida State, I would have been very, very lost without the Colombian Student Association. I don’t think I would have lasted a semester,” Rubio said.

The organization is affiliated with The Hispanic/Latino Student Union, the second largest student agency at Florida State and a nucleus for Latinos on campus. HLSU and its 11 affiliates offer educational and cultural activities, including Hispanic Heritage Month celebrations for all students.

Rubio initially selected Florida State because she could follow both of her passions, studio art and marine biology. “I don’t know how I’m going to connect them yet, but they’re both a part of me,” she said.

Even as she continues to experiment with art forms and show her work through the College of Visual Arts, Theatre, & Dance, she has become so excited about biology and research that she won a paid TA position to teach a biology lab for non-majors. She has 24 students.

“I want to inspire my students about biology because I love it,” she said. “I think I’m probably an idealistic teacher right now.”

Rubio started in research as a sophomore simply by asking Don Levitan, a professor of Biological Science, if she could join his lab team. Levitan teaches and conducts research involving the evolution of marine invertebrates, such as the flatworm, which regenerates after being cut into sections.

Rubio has been studying how population density affects the regeneration rate. Eventually, such research may provide clues to combat human aging.

“Dr. Levitan has a lot of patience with me and explains everything very well,” Rubio said. “I’ve learned how to conduct research and how to be responsible and manage my time.”

Levitan said that Rubio came up with her own research idea after a thorough literature search.

“Luisa works well independently, but also seeks and responds well to advice,” he said. “Each draft of her proposal and each modification of her experimental design were greatly improved. This forecasts a good beginning to a blossoming scientific career.”

Levitan encouraged Rubio to apply for the summer fellowship at the University of Texas Marine Science Institute in Port Aransas, where she was one of just 12 students. She studied levels of E. coli in coastal water because city officials worried the pollutant would be high. Instead, her studies over 10 weeks showed the E. coli count met environmental standards.

Levitan said that applying for outside funding is a skill students should master, not just for the financing but also for practice at describing a project well enough to get funding.

“It is also important to step outside of Florida State to expand a student’s perspective,” he said. “This not only applies to getting experience in other habitats and field sites, but also with other scientists who might have different views or offer different research techniques.”

Since Rubio started at Florida State, her parents and sister have moved from Florida to Virginia and then Puerto Rico, where her father has returned to school to change his career from engineering to teaching. She’s looking forward to a Christmas visit.

“Wherever I am is my hometown,” Rubio said. “I’m a little mix of everything.”