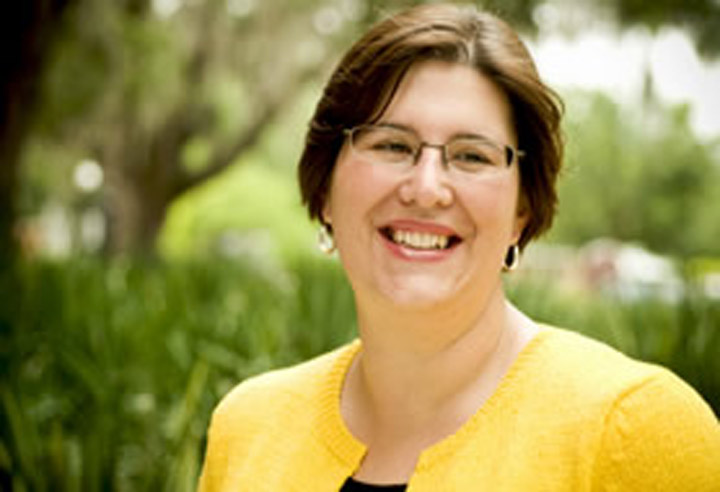 “Florida State has a reputation for creating gifted scholars and well-prepared teachers, and I was looking for a university that could do both.”

In the first few weeks of her Fulbright grant to study in the United Arab Emirates, Victoria Penziner went to dinner at the U.S. Consulate in Dubai, chaperoned a group of budding young photographers to the opening of their exhibit in Abu Dhabi and hiked through an oasis.

She also shopped at two widely known Middle East malls, one with a full aquarium and an Olympic-size ice-skating rink and the other home to the famous Ski Dubai slopes.

“These malls are fantastic as they reflect someone’s fantasy,” she said.

But for the most part, the young scholar from The Florida State University has been doing research on the history of the pearl trade in the 19th and 20th centuries and environmental policy as it has affected the pearl trade over the past 200 years in the Middle East.

“Many people assume that the UAE is an oil state, with nothing but nomads and desert prior to the discovery of oil in the 1960s,” she said in an e-mail. “By studying the early pearl industry, I hope to demonstrate that the emirates had been experiencing economic growth for about a century prior to the discovery of oil and that there had been significant changes due to pearl wealth.”

Penziner lives in a two bedroom, one-and-a-half bath, furnished apartment provided by the United Arab Emirates University where she is affiliated. She plans to be in the region for a year and graduate in spring 2011. She hopes to become a university professor.

“It is amazing to watch individuals come in as unsure and overwhelmed freshmen and develop in four short years into dynamic and formidable seniors, capable of organizing their lives around their passions,” said Penziner, who taught and mentored students as a graduate assistant at Florida State.

Penziner’s interest in the Middle East was piqued when she took a required non-Western history course for an undergraduate degree in history and elected to take Modern Middle East History taught by Peter Garretson, associate professor in the Department of History and co-director of the Middle East Center.

“I was hooked,” Penziner said. “That was one class and one professor who changed my life.”

Garretson would later become her major professor when she returned to Florida State for her doctorate.

“He has allowed me to develop as an historian over the past few years,” said Penziner, who grew up in Boca Raton, “and he has an uncanny way of knowing when to push me and when to allow me the space to find my own way.”

Penziner also joined the Middle East Center in its mission to foster interest in the region that spans southwest Asia, southeastern Europe and northeast Africa. In fact, she helped revise lessons used by outreach teams after they learned how little knowledge young people in kindergarten through the 12th grade have about the Middle East despite its strategic, economic and political importance to the United States.

As Penziner and others go into classrooms, they seek to make the learning fun. For example, they use Disney’s Aladdin to help dispel myths about the Middle East for kindergarteners. Older students may write their names in Arabic or learn traditional dances.

After 9-11, Penziner was also an early member of Florida State’s Middle East Peace Association, a driving force behind Middle East Peace Month activities, including a film festival that drew thousands of people and was capped by the “Arabian Nights, Persian Mornings and Israeli Afternoons” event. In addition, Penziner served as a board member in the Arab Cultural Association, which seeks to promote understanding of Arab culture on Florida State’s campus.

In addition, she helped organize the Student Darfur Awareness group aimed at raising awareness of injustice in the Sudan and raising funds for its people.

Penziner was studying for her master’s degree in Middle East History when she won the Ada Belle Winthrop-King Scholarship to study Arabic in Jordan. That same year, the Arabic Division of the Department of Modern Languages and Linguistics named her its outstanding graduate student. In 2008, she won a Department of History grant to travel to the United Arab Emirates to do preliminary research for her thesis.

She left Florida State for a short period to earn a second master’s degree in Near Eastern Studies at the University of Arizona. But she returned to Tallahassee for her doctorate.

“FSU has a reputation for creating gifted scholars and well-prepared teachers,” Penziner said, “and I was looking for a university that could do both.”