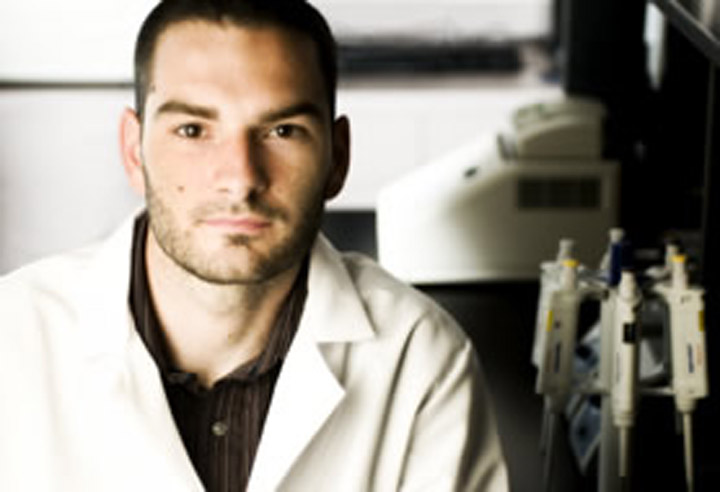 “Florida State has a great undergraduate research program that can really get you involved in doing cutting-edge, blow-your-mind, awesome research.”

After Kenneth Leonard earned his associate’s degree and started at The Florida State University, he says he found “a whole other world” where undergraduates are encouraged to do “cutting-edge, blow-your-mind, awesome” research.

He got so involved that he pushed himself to take difficult classes in his major, Exercise Science, in the College of Human Sciences. He also became a research assistant at the National High Magnetic Field Laboratory and won two awards to conduct his own research.

“I got much more motivated once I got to Florida State,” Leonard said. “I grew to realize I had a passion for research and what I wanted to do with my life changed.”

Leonard, who graduated in summer 2009, originally planned to become a physical therapist after he finished his studies at Pensacola Junior College. Instead, he went pre-med and launched himself into research.

As he did, he won a Bess. H. Ward Honors Thesis Award in 2008 and an Undergraduate Research and Creativity Activity Award, an Undergraduate Travel Award, and an Honors in the Major award in 2009. He was listed as one of the authors on two papers in journals published by the American College of Sports Medicine.

He plans to spend a year as a pharmacy tech to gain practical experience before he returns to school to earn a Ph.D. in pharmacy, a field where he can work in industry or academia.

Leonard has spent much of the past year working in the lab of Jeong-su Kim, assistant professor in the Department of Nutrition, Food and Exercise Sciences, who focuses on research on sarcopenia, age-related atrophy of skeleton muscle and other neuromuscular changes in aging, exercise and physical function.

“Ken has demonstrated his ability to observe every step of the process, sitting in on meetings and working with people in all aspects of our research activities,” Kim said. “His creativity, resourcefulness and ability to see a project through really made our studies distinctive and successful.”

For his own project with Kim as his advisor, Leonard took a functional approach, using 34 rats to study the influence of age on grip strength and motor functions. The animals represented two age groups, middle aged and elderly. Leonard’s project used leading-edge magnetic resonance.

His interest in the workings of aging bodies grew when he worked as a tech at a psychiatric hospital in Pensacola and realized that mental diseases were made worse by physical conditions. He attended the community college but switched to online classes when he was an intern with a Pensacola church helping in a relief program in Mississippi after Hurricane Katrina.

Leonard, who lived in Tampa before moving to Pensacola for high school, also has volunteered with “Youth for Christ” missions, including a trip to Ecuador to build an orphanage. He plans to also join a mission trip to South Africa in January.

In addition, he has been a counselor working with middle and high school students at a Christian summer youth camp that he attended as a camper. “I have taken on the commitment to give back to the camp that has given much to me,” he said.

At Florida State, Leonard also joined a Student Bowl team that took first place in the Southeast region in a Jeopardy-style competition in Exercise Science. His team advanced to the finals at the annual national competition at a conference of the American College of Sport Medicine in Seattle.

“FSU showers you with opportunities,” Leonard said. “When I started at Florida State, I expected to walk into big lecture halls with teachers who don’t care a lot about students. But professors at Florida State respect you and appreciate you. The university has exceeded every expectation I had.”