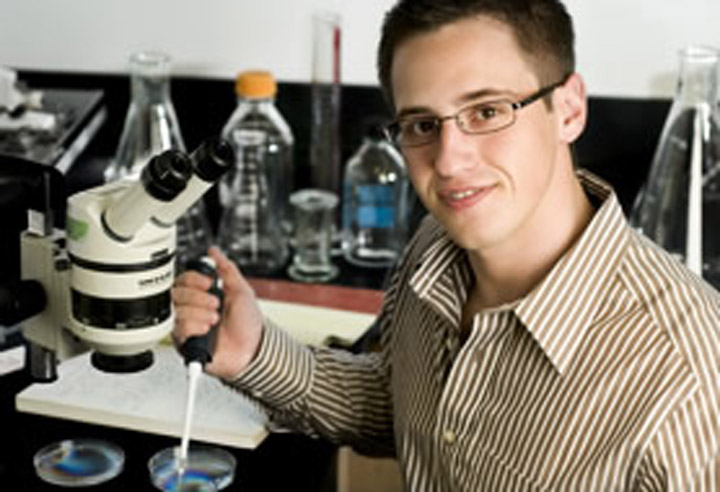 “There is no other institution out there that can give the tools of success to so many and yet still be so personable.”

As his mother endured surgery after surgery for eye disease, David Mari made the decision to become an eye surgeon.

He has a strong start as he enters his junior year as a Biological Science major at The Florida State University.

Fadool said he rarely brings a sophomore into the lab, but he made an exception for Mari.

“David is self-motivated, self-reliant, has a great work ethic and considers criticism an important step in his development,” said Fadool, who recently was part of a team heralded for a landmark study that uncovered a genetic mutation that could shed light on blindness in humans.

“This is challenging research,” Fadool said. “You don’t come into Florida State knowing how to do it. It takes work. David sees things he wants to do and goes after them.”

In addition, Mari has been trained to handle emergencies with the FSU Volunteer First Responders Unit and won the 2007-2008 General Chemistry Award. He also is a certified lifeguard and swimming instructor and volunteers as swimming coach for Special Olympics Leon County.

As a coach, he arranged for Special Olympic athletes to practice in the Leach Center swimming pool at Florida State, recruited other student volunteers and has been working with faculty in the College of Medicine to establish a local MedFest program to provide free health screenings required for participants in Special Olympics.

“Coaching Special Olympians makes my day,” Mari said. “You can go through life making it about yourself. To me that’s meaningless. I would rather live a life where I can have an impact on others as best I can.”

When Mari chose Florida State, he followed in the footsteps of his brother Adam Mari, who graduated in Fall 2003 with a major in Marketing in the College of Business. “His career has been thrilling to watch,” the younger Mari said. “So when it was time for me to apply for college, FSU seemed like my only choice.”

His goal is to earn an M.D.-Ph.D. and eventually practice as an ophthalmologist specializing in retinal surgery and to conduct retinal research. The retina is a layer of light-sensitive cells that line the inside back wall of the eyeball.

“My mother is legally blind, and the surgery she had throughout my childhood and teenage years influenced me to become a doctor,” said Mari, from Pembroke Pines. “Then I found out I could do eye research in college and volunteered.”

For his research to earn Honors in the Major, Mari is studying the eyes of zebrafish to identify fundamental genes governing the development of rod photoreceptors, which in humans affect night vision. The eventual goal of such research is to further therapies for retinal genetic dystrophies such as retinitis pigmentosa, macular degeneration and glaucoma.

“Doing research day in and day out makes me want to do it for the rest of my life,” Mari said. “My hope is to get a practice established and then have a lab to do research. I have a long way to go. With the guidance of outstanding Florida State faculty members, my plans for the future can be realized.”