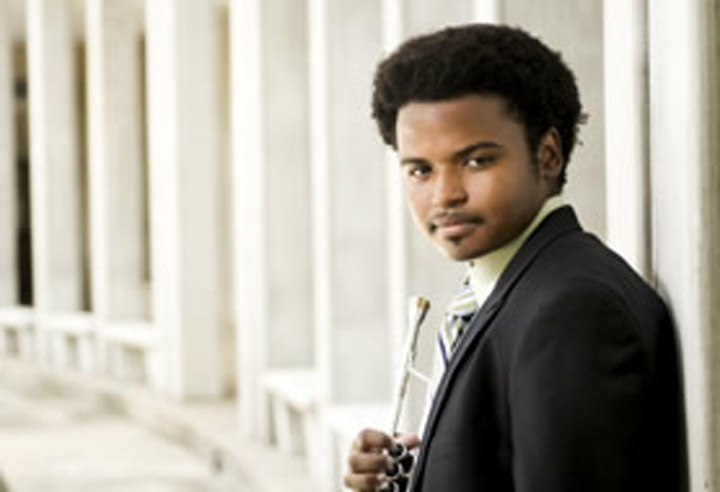 “I feel myself fortunate to have made so many connections through Florida State and my professors.”

As a music student at The Florida State University, Alphonso Horne has played trumpet with renowned jazz musician Marcus Roberts at the Lincoln Center in New York City.

Roberts, an assistant professor in the College of Music, invited Horne to join him recreating the album “Deep in the Shed,” described by The New York Times as a chronological history of jazz’s entire life.

“Marcus Roberts’ whole philosophy is getting young players out — that’s how great musicians learn, playing with the masters,” Horne said.

Horne, who plans to graduate in spring 2010 with a double major in jazz performance and trumpet performance, won the university’s highly coveted Brautlecht Scholar award from the College of Music based on scholarship and composition excellence — the same award his mentor won when he earned his BA at Florida State.

“Alphonso is easily recognized as a rising star,” Roberts said. “His success comes through hard work, and he is never satisfied with anything less than performing music at the highest level with creativity and technical perfection. Yet, he maintains a humble, warm, and personal approach with people.”

Horne said he was frightened when he went on stage with such notables as Roberts, Marsalis and six other musicians in The Allen Room at Jazz at Lincoln Center.

“Once I got up there, fear went out the door. Being afraid of sounding bad wasn’t an option,” Horne said. “Once you get up there, it’s game time.”

In a glowing review of the performance, The New York Times mentioned Horne as a trumpeter who “bore a deep Wynton Marsalis influence.” Horne has performed in a master class with Wynton Marsalis.

Horne said the Lincoln show and other performances prove the importance of the mind in music. Sometimes, he said, he finds it difficult to believe how phenomenally better a musician can sound when performing.

Most recently, Horne won first place in the jazz division of the National Trumpet Competition.

“To be honest, the award was humbling — the other players sounded really great,” Horne said. “When I look back at it, I think I played with the most expression and the most soul. An audience doesn’t want to listen to the most perfect accurate thing. They want to be touched. They’re looking for emotion.”

He also spent about a month at The Colorado College Music Festival, an internationally acclaimed program.

Horne, a Jacksonville native recognized as a future star while still in high school, chose Florida State over conservatory offers, in part because his mother puts such emphasis on education.

“Looking back, I’m glad I came to Florida State,” he said. “One, because of the connections I’ve had with my teachers. And two, I’ve matured and grown from their teachings, as a musician and as a person. If I had gone straight to New York, I could have forgotten who I am. Coming here has helped me maintain my personal integrity.”

He also took advantage of the chance to study in the College of Business. “Florida State helped me to get more well-rounded.”

In addition, Horne has played his trumpet in several Florida State groups, including The University Philharmonia, the University Symphony Orchestra, the top FSU Jazz Ensemble, the Jazz Combo and the Wind Orchestra. He often plays in the pit for musical theater shows, including October’s “On The Town.”

Horne’s music ability may be in his genes. His father is a jazz pianist and repairs instruments; his grandfather wrote songs in the hymnal book for the church he started in the 1940s when he left South Africa for the United States and bought 11 acres in Jacksonville. He taught African-Americans about their heritage, including the Bantu language.

Horne still joins the music ensemble at the Missionary African Universal Church when he goes home.