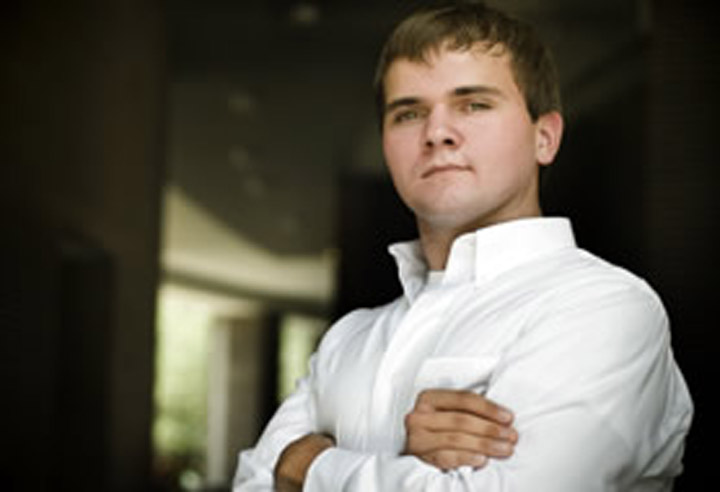 “Professor (Ebe) Randeree has taught me to never settle for something if I have bigger dreams or want more out of a situation.”

As a student volunteer at a national conference on healthcare technology, Jonathan Kight spent a week working 6 a.m. to 6 p.m. to help the event run smoothly for more than 27,000 professionals.

“Easily, I had the best time of my life,” said Kight, an August graduate in Florida State University’s Information Technology program in the College of Communication & Information. “I met with corporations like Google and saw the latest demos. Then I went out to see Chicago.”

Kight became intrigued with computers while playing video games. In high school, he built his own tower, but he was more interested in the theory and development behind the software. He chose Florida State because of its strong reputation in high tech fields.

He started as a computer science major but said he changed to IT when he realized he aspired to manage projects, teach others to use their technology, and lead an organization in meeting its communication needs.

“The best thing the IT program taught me was how important project management and planning really are in an organization,” he said. “You can’t just jump into something; you have to involve everybody. You can’t just do it yourself, especially in a technical world.”

Kight has been working periodically for more than six years in retail communications at Publix, which is based in his hometown of Lakeland. His goal is to eventually move to Seattle and work with Microsoft.

Kight, who was vice president of Florida State’s chapter of the Association of Information Technology Professionals, honed team leadership skills by helping develop what he calls extracurricular learning sessions that “feed your brain.”

“Basically, we wanted to learn about things we didn’t talk about in classes,” he said.

During a session on leadership, participants were split into teams, blindfolded, tied together and tangled up in a rope. They had only five minutes to untangle themselves and form the best triangle they could.

“The question was whether it spawned team leaders,” Kight said. “I’m the outspoken person who wants to get things done, so I started going around the circle trying to get people to work together.”

He helped plan and managed the event and his mentor, Ebe Randeree, of the College of Communication & Information, led the workshop.

“Professor Randeree has taught me to never settle for something if I have bigger dreams or want more out of a situation,” Kight said. “He reminded me that life has a lot of opportunities. I just have to be the one to fetch them.”

Kight had two internships, one with the Children’s Campaign, an advocacy group seeking to make children’s issues a legislative priority in Florida, and the other with the Florida Department of Agriculture and Consumer Services. He assisted IT teams and conducted product research. He also helped organize the “Children’s Campaign: Truth Tour FSU Live ’08,” an event with three bands as well as information on the needs of children.

In what might seem a contrast for a young man who laughingly refers to himself as a “computer geek,” Kight went to high school at the Lois Cowles Harrison Center for the Visual and Performing Arts in Lakeland. But he didn’t perform. Instead, he became a theater tech, handling lighting and sound, often with computerized equipment.

It was good background for his stint in April at the national conference of the Healthcare Information and Management Systems Society. He networked with professionals and attended more than a dozen education sessions.

Among the highlights of his time in Chicago, he was able to greet Dennis Quaid, award-winning actor and director and president of the Quaid Foundation for Patient Safety, and Alan Greenspan, former chairman of the Federal Reserve.