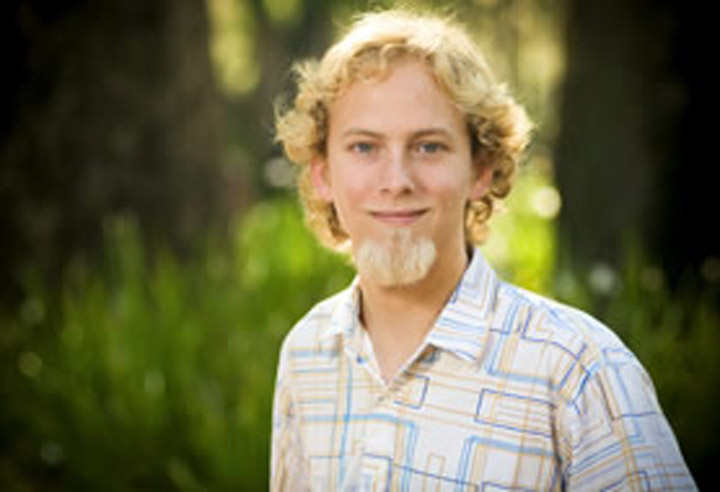 “A lot in Gamelan music are things familiar to me in physics.”

Keenan Pepper played hand and stick drums, gongs, metallophones, the ceng-ceng cymbals, the kajar time-keeping instrument and the reyong chimes in a Gamelan orchestra at The Florida State University the past four years. But he recently graduated with a double major in physics and mathematics.

He’s been accepted at the University of California-Berkeley to start work toward his doctorate in nuclear physics.

“A lot in Gamelan music are things familiar to me in physics,” Pepper said. For example, the instruments are flat and sharp and the interference between the notes creates a distinct type of music, which originated in Indonesia.

Pepper was honored with the Guenter Schwarz Memorial Scholar Award, which is given to an outstanding physics major who also has demonstrated a keen interest in the arts.

“This is one of the smartest and most successful undergraduate science and math majors we have,” said Philip Bowers, the Dwight B. Goodner Professor of Mathematics. “He excels at math and physics and has done significant research in physics.”

Pepper has earned a reputation as someone who helps other students figure out math and physics problems. “I like to get to the bottom of things and not accept inconsistencies,” he said.

As an undergraduate, Pepper joined a research team studying the structure of nuclei with Professor Samuel Tabor, director of the Superconducting Accelerator Laboratory, and was listed as a co-author on published papers. He helped conduct research on a collaborative project involving the use of laser technology to detect gravitational waves in outer space and worked on an unrelated project with the Los Alamos National Lab on combustion applications to make car and jet engines more efficient.

He won honorable mention in the North American Putnam Math Competition administered by The Mathematical Association of America, and his team took top honors at Florida State and ninth in the Southeast in a computer programming competition sponsored by the Association for Computer Machinery.

Pepper’s goal is to do real-world problem-solving using quantum computing, which is still in its infancy.

He already finds practical applications for his studies. For instance, he took organic chemistry for fun but also so he could learn about the ingredients on food labels. His father, Michael, the family chef, keeps a 6-by-10 foot white board on the wall and uses it to solve problems involving the chemistry of cooking. His younger brother recently graduated from high school and his sister, Madeleine Pepper, is a Florida State junior majoring in art.

Pepper said he stayed in his hometown of Tallahassee to earn his graduate degree because Florida State enjoys such a strong international reputation in the sciences with its world-class accelerator lab, National High Magnetic Field Lab and correspondingly strong faculty. He was particularly impressed that undergraduates have the chance to engage in research.

And, of course, the Florida State College of Music offers one of the nation’s few programs in ethnomusicology.