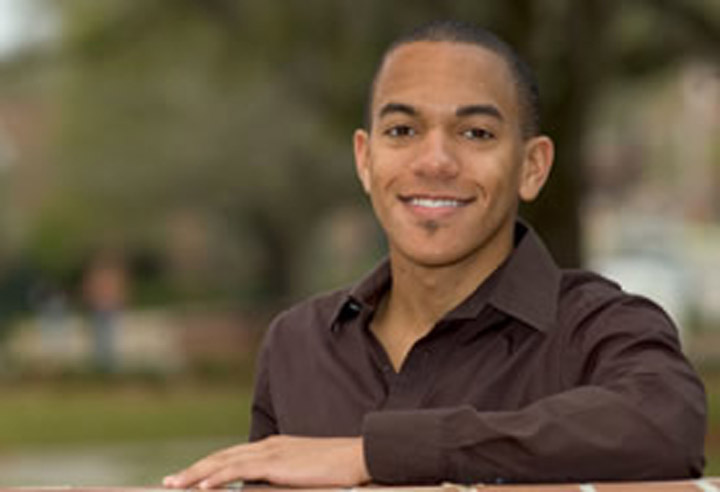 “Eating disorders are difficult to overcome, especially for men who, as they were growing up, were scorned for showing emotion or any weakness because that supposedly makes them effeminate.”

“In high school, I took AP Psychology with a phenomenal teacher that fostered my interests. The way psychological principles and research are used to help people is highly appealing to me,” says Honors student Sean Hawkeswood, who recently received the Bess Ward Honors Thesis Award and the Undergraduate Research and Creative Activity Award for his research, “An Assessment of Body Preference and Dissatisfaction in Gay and Straight Men.”

During high school, Sean suffered from an eating disorder. Now recovered, his attention is drawn to the research of these disorders and the body image in men. “Clearly, not only women are affected by body image. Approximately ten percent of eating disorders occur in men, a topic not thoroughly covered in the literature. I am also interested in learning whether being gay made me, and others like me, more prone to this type of deleterious thinking.”

His research will also serve for his Honors in the Major Thesis, which is being guided by April Smith, graduate student, and Thomas Joiner, professor of Psychology. Sean says, “Eating disorders are difficult to overcome, especially for men who, as they were growing up, were scorned for showing emotion or any weakness because that supposedly makes them effeminate. It is my hope that as more research is directed toward the problems that males face, treatment and prevention will become less stigmatized and more commonplace.”

Sean believes in using his talents to help others. “I’ve always felt safe and secure at FSU because I know where to find guidance should I need it. I want others to feel the same way during their time here.” In his sophomore year, he served as a resident assistant for Landis Hall’s Honors community. “Honors students know how to have a good time, but they are also motivated and respectful. The largest changes in college occur at the beginning and the end—it was neat to watch them grow. We had laughter, tears, and fights, but I grew tremendously during this eye-opening experience.”

As a Freshman Interest Group leader, Sean led a colloquium for students interested in exploring Social Science as a major. “It can be intimidating for younger students to connect one-on-one with instructors who are much older and very busy. I let my students know that they could come to me with anything. We still maintain contact, and I hope to keep it that way.”

Currently, Sean serves as a Psychology peer advisor during the day, assisting the department’s academic advisors, and at night he teaches yoga at the Leach Center. “I really enjoy leading people.”

After graduation in the fall, and before entering graduate school, Sean plans to visit Japan for a year—”I love the Japanese culture, and I want to step away from school for a minute to experience what else life has to offer. It’s simultaneously terrifying and exciting.”