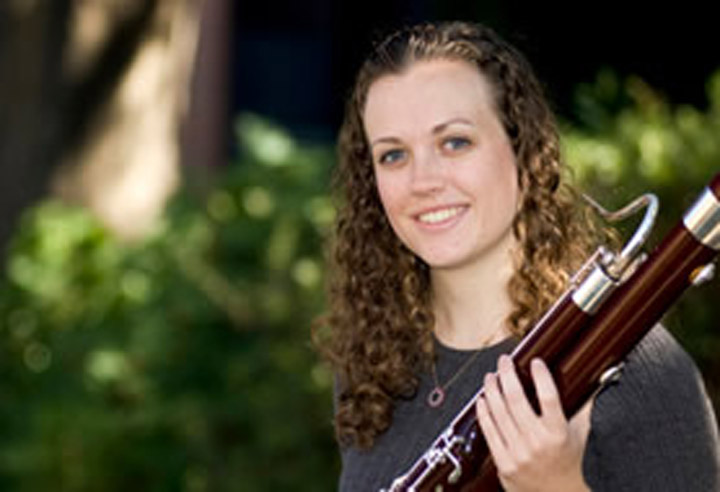 “In [Literature and Music] we look for a reflection of our own lives but with a twist. We look for truth—something we've felt but haven't known how to express.”

“People kept telling me that a double major in Music and English Literature was impossible, but I refused to accept it,” says Eileen Reynolds, a senior who maintains a perfect 4.0 GPA and who has been presented with the College of Music’s highest award—the Presser. “I had two passions that were equally important to me—to be a better musician and a better reader and writer.

“In high school, I was in the International Baccalaureate program, which is about being well versed in six different subject areas. On top of that, I was playing two instruments at a competitive level and doing a million other things outside of school. I thought college shouldn’t be any different.

“Both Literature and Music are art forms born out of the same sets of social and historical factors. In them, we look for a reflection of our own lives but with a twist. We look for truth—something we’ve felt but haven’t known how to express.

“Success in Music is largely about discipline and time management, but Music also has the power to touch us on some fundamental human level. Without fail, when I’m at my most frazzled, I’ll hear something that gives me goose bumps, like my soul is being tickled. There’s magic in it.

“I’ve always loved to read. A good book, like good music, has the power to transport me. I also like to write—I’m more charming on the page than in person. Dr. Shinn [Christopher Shinn, assistant professor of English], who has challenged me to continue to improve my writing, once said that new words were like new toys; he could spend hours turning them over in his mind, the way a kid plays with a toy truck. I can identify with that feeling—I love thinking about how words go together and about the effect that the combinations make.

“I wanted to study in London [through International Programs] because so many great authors were influenced by the English culture. I had a blast! It was a pilgrimage to the birthplace of the language I love so much. Through a class in Theatre, I got to see so many shows, including my favorite Shakespearean play, Othello, at the restored Globe Theatre. Now everything I read that takes place in London really comes alive for me.

“I sometimes tell people that my ideal job would be music critic for The New York Times. I’m never sure whether I’m joking. But my most memorable experience was a guest lecture sponsored by the Musicology department. The visiting scholar Thomas Porcello used all of his skills as a musician, engineer, writer, speaker, and linguist to give a great presentation. I was inspired by the way he had integrated different fields of study into one career—that’s my ultimate goal.”