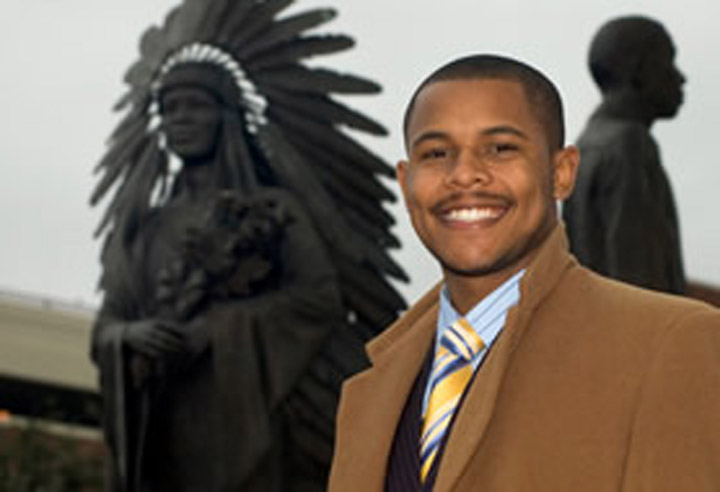 “Psychology gives me a chance to listen to people's problems, to try to understand why they do what they do, and why the things that bother them seem to have such an effect.”

As a child Dorian George knew he was a good listener. His need to understand people, and his love of problem solving, drew him to the field of Psychology.

“Psychology gives me a chance to listen to people’s problems, to try to understand why they do what they do, and why the things that bother them seem to have such an effect,” Dorian says. “To help them find a solution to their problems is a challenge that I love.”

After graduation in the spring, Dorian plans to join Teach for America. “Hopefully, I will get the opportunity to improve upon the academic gap in a low-income community.” Then, he’ll work on his master’s and doctoral degrees in Psychology, for he plans to teach at the college level. Dr. Na’im Akbar, assistant instructor of Psychology and author of Breaking the Chains of Psychological Slavery, “sealed the passion” Dorian now has for teaching. “He taught me that not only is education important, but also educating the members of our culture about their history and how to better ourselves as a cultural group.”

While teaching, Dorian also plans to open a counseling practice. “What better way to learn how to run a business,” he asks, “than to minor in Entrepreneurship and Small Business Management?” Indeed, the minor has given him the education he requires for such an endeavor, but, he says, “Being involved in different service oriented organizations has taught me about customer relations. It’s like working as a politician, constantly trying to make sure your organization is giving people what they want and to never let them down.”

Being “willing to serve at all times,” Dorian has held several positions on campus. First, as a counselor for the CARE Summer Bridge Program, which is designed to help those students, who are disadvantaged by economic, cultural or educational circumstances, succeed academically. For the past three years he has served as a resident assistant in four separate residence halls, which, he says, has given him “the opportunity to be a listener for so many voices. I could not have picked a better job to suit my needs.”

This past year he became president of Alpha Phi Alpha Fraternity, a role in which he helps lead his brothers “toward our aims of manly deeds, scholarship, and love for all mankind.” He says, “My fraternity is at the heart of all my accomplishments. Without it I would have no Tallahassee support system to push me to be a better man.”

Recently being crowned Homecoming Chief is his “most honored” achievement. “It shows that my peers have witnessed my impact on this campus, that they feel I am worthy of representing the University. As a young Black man, a member of a minority on this campus, that is something I will never forget, and is still somewhat unbelievable.”