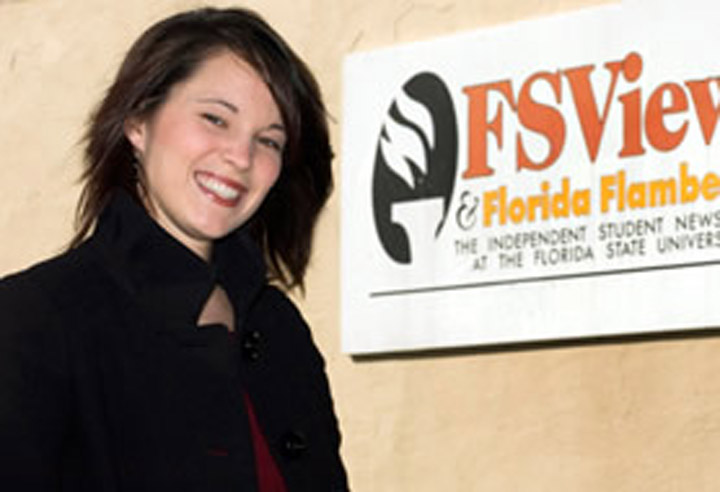 “Sports have been behind everything I have ever worked toward since I was 15. Nothing is worth doing if you don't love it, so I had to find a career that somehow involved sports.”

“Sports have been behind everything I have ever worked toward since I was 15. Nothing is worth doing if you don’t love it, so I had to find a career that somehow involved sports,” says Mallory Schneider, a senior majoring in Media Production.

She immediately began her search—first, interning for the Northwest Florida Daily News in Fort Walton Beach, her hometown. “I wrote a few sports articles, but I wasn’t quite sure newspaper reporting was something I wanted to pursue professionally.”

She was elated when Florida State’s Department of Communications accepted her into its highly competitive Media Production program. “The program, with its state-of-the-art resources, has given me many opportunities to get involved with sports broadcasting through Seminole Productions,” the department’s video production unit.

Choosing a minor was a different story. “I couldn’t find one that fit my interests and serve my goals, so my advisor and I designed a minor in Sport Psychology, choosing 15 credits from two departments, Sport Management and Psychology.”

She continued her outside-the-classroom pursuits, working as a stringer for the Associated Press. Covering a Florida State football game, she met the then-managing editor of the FSView, who encouraged her to apply. “I became a contributing sports writer in January 2006, and in just four months I was promoted to managing editor. During that year, we were presented with the Pacemaker Award by the Associated Collegiate Press, recognizing us as the best collegiate paper in the nation.

“Now as the editor-in-chief, I am responsible for editorial content, making sure we provide students with information they cannot find anywhere else. We produce 25,000 copies per issue, but if I can reach just one student per issue that means the world to me.”

For the past two years, Mallory has been a reporter for Fox Sports Network’s Sun Sports. “My pieces, which highlight an athlete or coach, air on Saturday mornings on the Seminole Sports Magazine and other shows. I am also a host of Seminole Update, which familiarizes the viewers with sporting events on campus that students might not know about.” Last summer, she also worked as a sports production intern for Turner Broadcasting in Atlanta, putting together tapes of basketball and baseball highlights from the library’s archival footage.

After graduation, Mallory will begin working toward a law degree, perhaps to specialize in Contract Law or Sports and Entertainment Law. She still plans to pursue a career in sports broadcasting, but is also considering the negotiation of contracts for professional and collegiate coaches and, with such an education, she could “become a legal analyst for ESPN, providing insight into issues of sports law.”