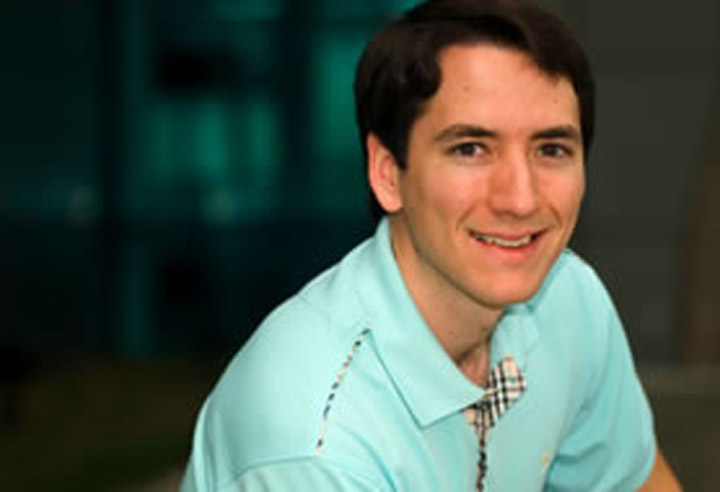 “My research involves improving the performance of off-road robots by reducing unnecessary power consumption and allowing them to move more precisely on difficult terrains.”

“From a young age I have been interested in the inner workings of all kinds of mechanical and electrical devices and enjoyed taking them apart, studying them, and putting them back together,” says Joseph Auchter, a master’s student in Mechanical Engineering who has been awarded a University Fellowship for a second year.

“As a freshman I wanted to begin a practical education outside of the classroom. I approached Dr. Carl Moore, who asked me to gather information about walking robots. After that, I was hooked on robotics. Dr. Moore is a competitive researcher, a committed teacher, and has helped build the College of Engineering’s robotics program to an impressive level.

“To help keep military personnel out of harm’s way, our lab, the Center for Intelligent Systems, Control, and Robotics (CISCOR), has received a grant from the Army to develop algorithms for off-road mobile robots. These robots will provide surveillance in dangerous areas, travel long distances with no human intervention, and will someday transport supplies and evacuate injured soldiers from the battlefield. My research involves improving the performance of off-road robots by reducing unnecessary power consumption and allowing them to move more precisely on difficult terrains.”

Joe received valuable experience during the summer of 2005, having won a 12-week paid internship in the prestigious NASA Undergraduate Student Research Program. At the Glenn Research Center in Ohio, the robotics group had developed “Puck,” a small prototype robot equipped with sensors that allow it to locate itself, detect nearby objects, and communicate with other robots. “My job was to program Puck in such a way that future researchers could easily interact with it and create experiments quickly, without worrying about the details of the electronics.”

For the 2007 International Conference on Intelligent Automation and Robotics held in Berkeley, which brought together Engineering and Computer Science researchers from around the world, Joe presented his research on the computer simulation of a wheeled robot moving over extremely rough terrains. “Dr. Moore and I are exploring one way of improving the robot’s performance by reducing wheel slip, which is an undesirable, uncontrolled motion that wastes power and can cause the robot a lot of trouble.” His paper was so well received that he has been invited to write an extended version for a book chapter.

Joe says, “An engineer is somewhat like an artist—creative and thoughtful. For me, inspiration comes from being surrounded by smart, dedicated people working on a variety of interesting projects. It’s an exciting time to be a robotics engineer.”