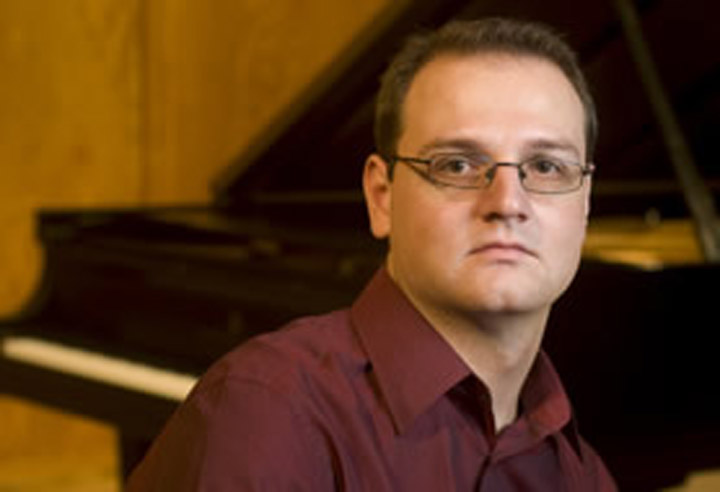 “I feel a strong sense of responsibility to enrich people's lives by performing and teaching classical piano, thereby exposing them to other cultures so that they can discover new ideas and forms of expression.”

“At a very young age, I knew I had a passion for Music,” says Hristo Birbochukov, a doctoral candidate in Piano Performance and an International student from Bulgaria.

“Since that time, I have realized the importance of Music to society. I feel a strong sense of responsibility to enrich people’s lives by performing and teaching classical piano, thereby exposing them to other cultures so that they can discover new ideas and forms of expression, and, ultimately, to experience an incredible moment of truth.

“For the audience, the moment begins with a piano at the center of an otherwise blank stage. The performer enters, sits down, and produces the first sounds—sound waves that cannot be seen or touched, yet they form very real images, colors, and emotions in each audience member. Someone may experience joy in the similarities between the thoughts of the composer, the performer, and himself. Another may discover something new about herself. Perhaps another will feel the excitement of being alive. To be able to touch each person depends on the performer and his talent.”

After receiving a bachelor’s degree in Piano Performance from one of the most prominent music institutions in Eastern Europe—the State Academy of Music in Sofia, Bulgaria, Hristo was invited to pursue his master’s degree at Southeastern Louisiana University. While there, he won the 2003 Young Artist Competition, sponsored by the Monroe Symphony Orchestra, was the featured pianist for a television concert with the Southeastern Chamber Orchestra, and was awarded a Liberace Scholar Grant to attend the Las Vegas Music Festival.

Why study Music in America? Hristo explains, “The U.S. has always been the land of opportunity, where, if you work hard, you can achieve. Plus, nowadays the level of the performing arts is equivalent to Europe’s.”

For his doctoral studies, Hristo chose Florida State’s School of Music. “I was awarded a Teaching Assistantship. Since teaching at the university level is one of my goals, this was an opportunity not to be missed.” He has been teaching piano to undergraduates in classes the past two years and this summer at FSU’s summer Honors Piano Camp, while refining his own skills under the tutelage of Dr. James Nalley, “a truly wonderful person and piano teacher.”

The past year has been particularly rich in recognitions. He was chosen unanimously for the 2007 Phi Kappa Phi Artist of the Year Award and was invited to join the Pi Kappa Lambda Music Honor Society. For the second time, he was awarded a Tallahassee Music Guild Scholarship, and has been honored with an Edward Kilenyi Piano Scholarship.

After graduation in the spring, Hristo plans to teach and perform wherever a good opportunity presents itself. He explains, “Musicians can feel at home anywhere, as long as we have our music.”