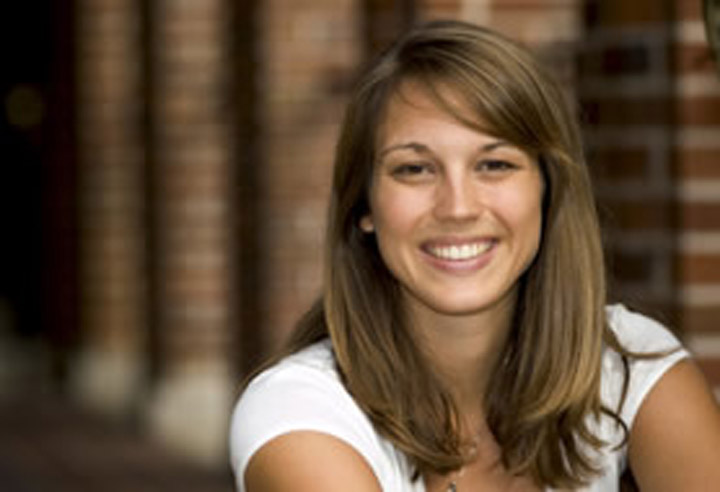 “It was a good Christmas present—we can't exist without one another, so we should do what we can to make life easier for one another.”

“We arrived in Biloxi over a year after Katrina hit, but the houses and shops were still a mess. People had piles of soaked muck, what was left of their lives, outside their homes. It was dumbfounding to see all the damage that was done,” says Nicole Emanuele, this year’s winner of the Film School’s Humanitarian of the Year Award.

Nicole and her sister hooked up with Habitat for Humanity, gathered friends and family together, and drove to Biloxi over the 2006 Christmas break to help out. “We painted, and installed soffits, roofing (without nail guns), and insulation. At night, we lodged under the bleachers of an old high school football stadium. Everyday we ate breakfast, packed our lunch, and worked until evening.

“Since the Naval shipyard had shut down, Habitat hires the men who are out of work until the shipyard gets back on its feet. Those guys gave us a lot of insight into what was going on in the community. We saw things differently afterward. It reminded me why I fell in love with film sets. You put in long, hard hours with a random mix of people and at the end of the day you can’t even imagine why you had felt that they were any different than you. It was a good Christmas present—we can’t exist without one another, so we should do what we can to make life easier for one another.”

“Filmmaking found me,” Nicole explains of her love. “In high school, my cousin Larry helped me film a school project, and in turn I helped him produce his Thesis film for Temple University. I never had more fun in my life. I became addicted. Through the Maryland Film Commission, I found independent film sets to work on, and I started editing and making films myself. Then, my friends and I won a short film contest, with a free trip to Hawaii.”

When looking to further her studies, Nicole wanted “a real college experience,” which brought her to Florida State. Plus, she says, “The Film School allows students to direct their own films from the moment they enter the program.” Last year, she was a national finalist for the Coca Cola Refreshing Filmmakers Award, which awarded her $7500 to produce the script she had entered.

An Honors student, Nicole is now in her final semester of studies. Of all areas of filmmaking, screenwriting is her favorite. For her Honors Thesis, she wrote her first feature-length screenplay. “I really love to tell stories and make people laugh.”

After graduation, Nicole will begin an internship at Cinetic Media, an independent film sales company in New York City. She says, “I am excited about taking my first steps into the film industry with an established company that helps small films get the respect they deserve.”