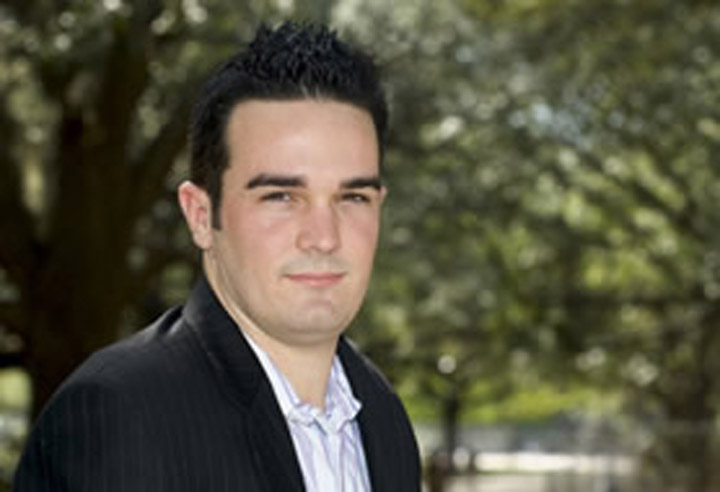 “International Affairs opens you, gives you a pretty neat perspective. With a world as big as ours, it's important to realize that America isn't the only country.”

“I entered Florida State with only three credit hours, so when I told the advisors that I wanted to double major and graduate in three years, they looked at me sort of weird,” says Ryan Kelly, “but I knew it was doable.”

Ryan attributes his can-do attitude to his mother “who raised three kids on her own and went back to school to get a bachelor’s degree in Education, graduating with honors.” He says, “If she could do all that, I could surely finish in three years.”

To pay his way, Ryan works part-time at a local print shop—”I’ve been blessed not having to take out any student loans or to accumulate any debt.” Taking a full course load during the summers, earning “a lot of credit” through CLEP, and using his time-management skills will enable him to graduate this spring as a Degree in Three student with a double major in Political Science and International Affairs.

Academics have always been his priority (he maintains a 3.8 GPA), having chosen his career path as early as ninth grade. “If you have a passion for something like politics or becoming a lawyer, it’s better to know it early,” he says, “and looking at other cultures has always fascinated me. International Affairs opens you, gives you a pretty neat perspective. With a world as big as ours, it’s important to realize that America isn’t the only country.”

To gain experience, Ryan has been interning this past year for U.S. Senator Bill Nelson. “I’ve been extremely lucky to have such a great opportunity,” Ryan says. “I try to help constituents out in any way I or the Senator can, and I track public opinion on issues affecting the citizens of Florida. Interning really keeps you on your toes. You have to know what’s going on in the country, which is great because it keeps me up to date with a lot of issues.”

Believing it is “very important to pass knowledge on to others,” Ryan is currently teaching a Pre-Law class to incoming freshman through the Freshman Interest Groups (FIG) program. “I took the same Pre-Law FIG that I am now teaching, which gives me a unique perspective, and allows me to say, ‘Hey, I know what it feels like to be in your shoes.'” He’s also discovered he loves teaching and may take up the career after he “practices law for awhile.”

Law school in California is his next step. “I like the fast paced environment out there, but Florida State has definitely prepared me. It’s important to immerse yourself in different facets of your school’s culture and to take advantage of everything offered. That’s what I’ve done at FSU, and it’s served me well.”