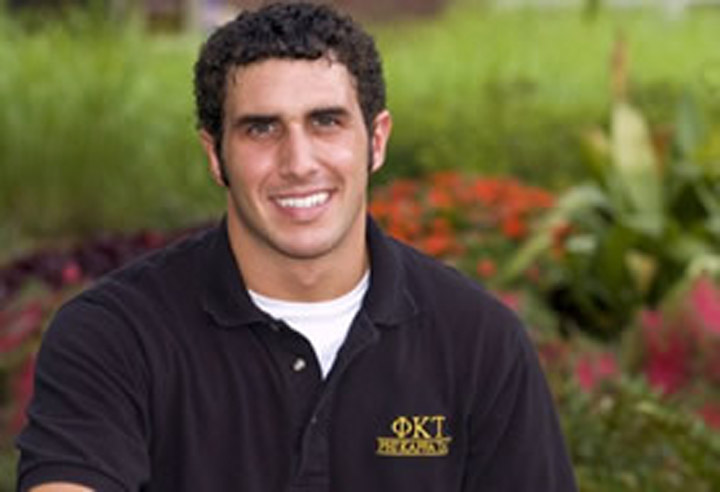 “Fraternities and sororities are great resources; they give students opportunities to find out who they are, and they can even build future leaders, if you get involved.”

“Being an Orientation leader (OL) for the past two years has given me a new outlook on diversity, integrity, and respect,” says Ryan Schooler, a senior majoring in Information Technology. “I see freshmen as peers. As an OL, you are their first real friend at FSU; it’s your responsibility to make them feel welcome in what we call ‘our home.’

“Orientation lasts from the beginning of May to the end of June, and each session is a two-day event, but the job doesn’t stop there. You are a resource for these students and should always represent yourself that way. Orientation has taught me that even though we come from different backgrounds, we have so much in common; we aren’t that different.”

When Ryan arrived on campus as a freshman, he knew little about Greek Life, but then he met “a group of gentlemen” who would impact the remainder of his college career—he rushed for the Phi Kappa Tau fraternity. He says, “I have always disliked the stereotype of Greek Life on college campuses. Fraternities and sororities are great resources; they give students opportunities to find out who they are, and they can even build future leaders, if you get involved.”

From the beginning, Ryan has been involved in his fraternity—as president of his pledge class, as recruitment chair, and recently as president. He has lived in Heritage Grove for the past three years, adjusting to the “ups and downs of life in a fraternity house,” but also “making memories that will last a lifetime.”

Since his junior year, due to his excellence in leadership and academics, Ryan has been involved with the Order of Omega, a Greek Honor society that “serves the community through events such as Trick or Treat on Greek Street, Homecoming, and Dance Marathon.” Recently, he became a member of the Seminole Torchbearers, the organization that generates financial and public support for Student Affairs. Ryan says, “The Seminole Torchbearers have raised money for the Leach Center, the new classroom building at the Union, and a $150,000 endowment to help support leadership-building initiatives across campus.”

In the spring, Ryan will complete his bachelor’s in Information Technology—”I have always enjoyed technology and the new products that are constantly emerging”—as well as a minor in Business—”Technology and business constantly interact.” He plans to obtain an MBA, which will enable him to “to compete in the ever-changing business/technology world.”

He’ll go wherever he can find a job that fits his interest. “I want to have fun with my job and not go home each day hating it. There is so much of life that has yet to be experienced.” In his college career, however, he’s made a pretty good start.