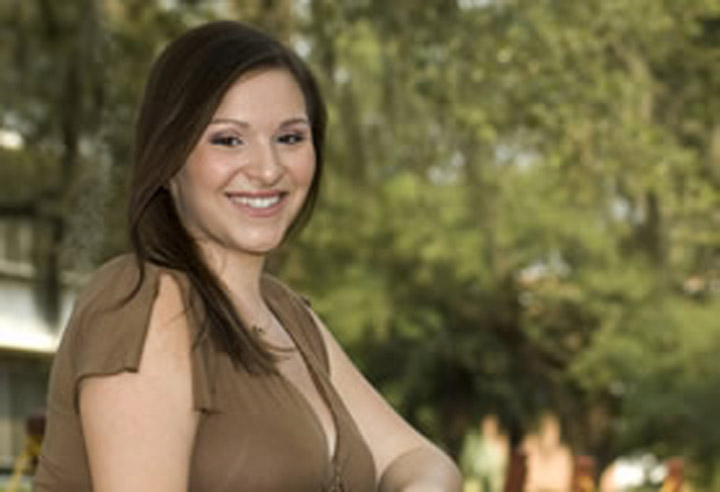 “I am more content to perform as a lawyer, to save a child from an abusive family, or make sure a person has not been denied her civil liberties. Riches come from serving others.”

“My family has accomplished so many great things. Their efforts for their communities have inspired me to pursue a career in public service,” says Brynn Titone, an Honors student who is majoring in Mass Media Studies and is planning a career in Law.

At an early age, Brynn learned the value of service. “The kindness I received from a Guardian ad Litem volunteer during my parents’ divorce had a big impact on me. I still remember how much of a difference that person made in my life, and I have always searched for ways to return the favor.”

She had indeed found ways—she now serves as a Guardian ad Litem volunteer for abused and neglected children, and she has begun training to become a volunteer counselor for the Refuge House, Tallahassee’s shelter for victims of domestic violence.

Her background as a singer—for the College of Music’s Vocal Jazz Ensemble—as an actress in community theatres, and her training in Communications “make it easy” for her to use good judgment while speaking in front of large groups.

Brynn became WFSU 88.9’s first campus correspondent, reporting on issues concerning college students. Currently, she is interning in the promotions department at Clear Channel Radio Tallahassee. Of her experience, Brynn says, “Radio is specific, yet boundless. It’s helped me understand that I can strive for my goals in public service by participating in an array of community and academic outlets; for instance, my current project is a non-profit organization dedicated to the support and care of animals in the Big Bend area.” Brynn is also the fundraising coordinator for both the FSU Advertising Club and the Pre-Law Society.

Due to her academic achievements, Brynn has been inducted into Florida State’s Golden Key Honour Society, the national Communication honor society Lambda Pi Eta, and the National Collegiate Honor Society.

Dean Karen Laughlin has asked Brynn to become a Pre-Law Freshman Interest Group leader. Brynn says, “I remember how scary that first year was for me. This program is a fantastic way to mentor students during their transition, to help them decide how to proceed.” As an older sister—her brother Trey is now studying at FSU—Brynn has acquired practice in guiding the uninitiated.

While meeting State Senator Mike Haridopolos, following his lecture in a Mass Media Law class, Brynn expressed her interest in state government. Impressed, the Senator offered her the chance to experience it first hand. She will begin interning for him in the upcoming Legislative sessions.

Brynn is learning about media, public relations, and advertising, while concentrating on media law. Music and performance will always hold a special place in her heart, but she’s discovered that “law is like being in a play.” She explains, “Lawyers carefully research and partially memorize cases, and prepare elaborate speeches to be performed in front of a courtroom audience. I am more content to perform as a lawyer, to save a child from an abusive family, or make sure a person has not been denied her civil liberties. Riches come from serving others.”