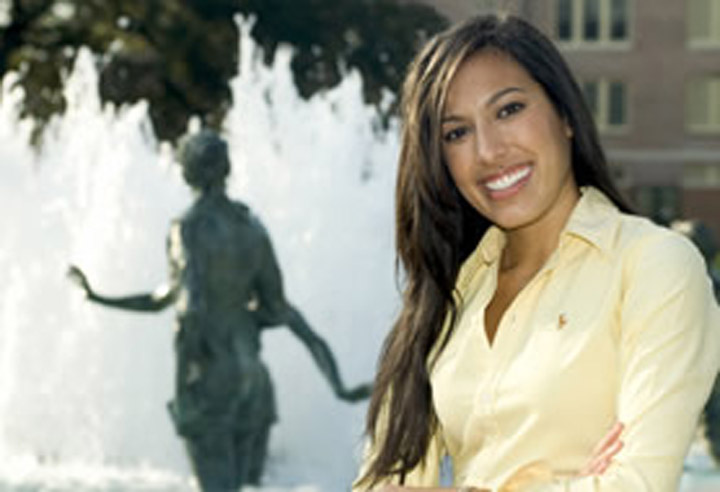 “English…is such a versatile major, teaching you to become a better communicator, think open-mindedly, and analyze a variety of situations.”

From her first English Literature class, Jennifer Gaviria became “captivated” with the subject. “English allows you to freely express your thoughts and feelings in such a way that a blend of momentous ideas is created, and it’s such a versatile major, teaching you to become a better communicator, think open-mindedly, and analyze a variety of situations.”

The skills she has acquired from studying English, as well as the knowledge gained from her Psychology minor, will serve her well as she “travels the world to experience different cultures.” For Jennifer has an appreciation for diversity. “People have so much to offer with their different perspectives.”

Following graduation in the spring, Jennifer will explore South America, beginning with a visit to Peru, her father’s native country. Jennifer grew up hearing his favorite Spanish saying, Siempre ariba! Siempre fuerte! (Always up! Always strong!), which taught her to maintain a positive outlook. Both of her parents, with their struggles to achieve personal success, instilled in her “the importance of motivation, dedication, and above all, believing in who you are and what you do.”

Jennifer’s belief is evidenced by her academic achievements—Dean’s List nearly every semester, and induction into the Golden Key International Honor Society, Garnet and Gold Key, and the Order of Omega. This past spring, she was recognized with the Who’s Who Among Students Award.

One particular English instructor—Kristi Steinmetz—also encouraged Jennifer to excel academically. “I am a very hard working student, but her Women in Literature course was the most demanding. She held us to a high standard, encouraging us to rise and face the challenges, which has prepared us for future obstacles in life.”

Kappa Delta, her sorority, has given Jennifer the confidence to expect a great deal of herself. Having served as both the activities chair and the academic excellence chair, she has learned “the true meaning of hard work and friendship,” and she’s realized the importance of dedicating herself to causes that will benefit others. “As a group organization, Kappa Delta envisions a common goal and works in unison to accomplish that goal.”

Going further, by “improving the lives of others and effecting positive change in a working environment,” Jennifer plans to pursue a career in Business Communications. “While promoting morale and productivity in the work place,” she says, “I want to implement strategies that will improve a company’s performance.”