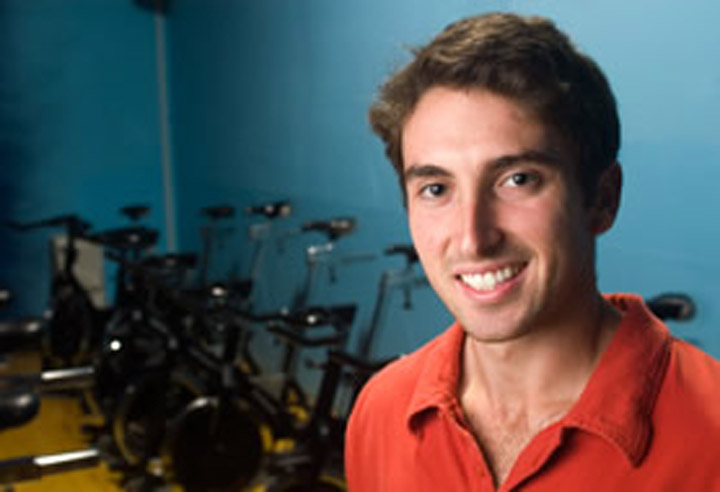 “It is our responsibility as citizens to conserve as much energy as possible. If the NRGYM works, every university gym nationwide, maybe every gym in the world could be transformed.”

“While working at Planet Smoothie in the Leach Center, I would constantly stare at the movement of the gym, the energy being expended by the students while working out,” says Zachary Zehnder. “It was then that I decided to research the concept of creating an NRGYM (EnergyGym), a student-powered workout facility.”

Could the energy a student uses on a stationary bicycle, elliptical machine, or stair stepper be harnessed to power the lights of the gym? Is it possible to create a human power plant? Zach explains, “To become electricity generating, a workout facility must have: students who provide the mechanical energy for recapture; exercise equipment retrofitted into electricity generating devices; generators capable of transferring the mechanical energy into electrical energy; battery banks (storage units) for the generated electricity; and inverters that transfer the direct current stored in the batteries into usable alternating current.”

“On paper the idea is cost effective, and the equipment will pay itself off in less than five years,” Zach declares. “I am now ordering the parts to create a working prototype, which will reveal whether or not it is truly economical. When you take into account the money saved on utilities, a decrease in our dependence on fossil fuels, and the reduction in greenhouse gases, it should be cost prohibitive.”

For his idea, which has led to four months of research to determine feasibility, he was honored with the Undergraduate Research and Creative Activity Award.

Upon arriving at Florida State, Zach knew he wanted to become a Civil Engineer, a discipline focusing primarily on public works such as buildings, bridges, and land development. Though the NRGYM concept has no apparent relation to his academic major, the problem solving mentality associated with all scientific fields has led to an obvious need for energy conservative systems. He says, “I want to help out the community wherever I can, whether it is in the form of conserving energy or land development.

“This is a chance for individuals to help the environment on a personal level. It is our responsibility as citizens to conserve energy as much as possible. If the NRGYM works, every university gym nationwide, maybe every gym in the world could be transformed.”