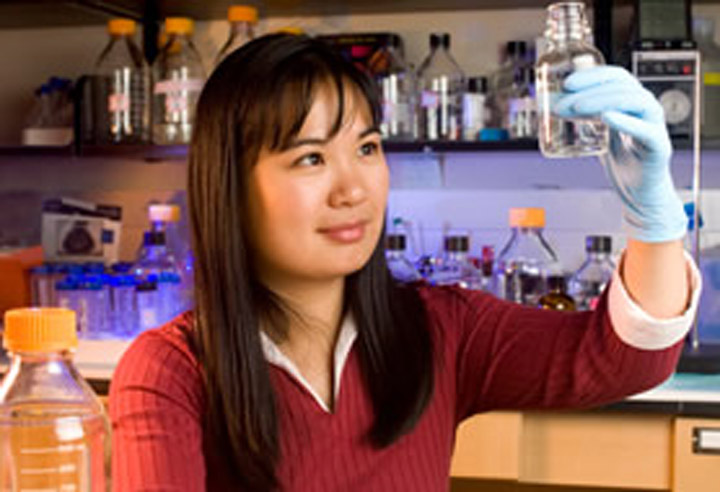 “This research combines Biochemistry with Physics on a microscopic level, and is an opportunity to connect knowledge with experience, which gets you really excited about science!”

“I have always been very curious, questioning why and how the world functions the way it does. As a child I would spend most of the day outside, staring at an ant kingdom or at worms producing longitudinal waves as they moved from leaf to twig,” says Qing Zhe Ni, a junior majoring in Chemistry.

Her parents must have known the child they brought into the world, naming her appropriately—the Chinese character Qing translates to “clarity” and Zhe to “philosophical.” Indeed, Qing admits her thirst for knowledge continually deepens.

A superb student (4.0 GPA), Qing was accepted by some of the top universities in the nation, but because “a lot of outstanding scientists working on cutting edge research are here,” which she wants to be part of, she chose to attend Florida State. Since last August, she has been performing research in the lab of Dr. Timothy Logan, who focuses on the connection between protein structure and protein function.

Qing’s research goal, for which she was awarded the Undergraduate Research and Creative Activity Award, is to make a control for the glycosylated Thy-1 protein, a known regulator of nerve growth in the central nervous system. She explains, “To better understand Thy-1 functions, we will determine its three-dimensional structure. Due to the low yield and complexity of the carbohydrate groups, it can be very difficult and costly to express Thy-1 in mammalian cell culture. Therefore, my research is to express Thy-1 in E. coli, where it will be expressed without glycosylation, which will serve as a control. My project involves the expression, purification, and refolding of Thy-1. From that, we can obtain additional information on the impacts the carbohydrate groups have on the protein part of Thy-1 and determine its structure.”

“This research combines Biochemistry with Physics on a microscopic level,” she says, “and is an opportunity to connect knowledge with experience, which gets you really excited about science. Looking back over the past year, I can’t believe how much I have learned!”

To alleviate the stresses of college life, maintaining physical and psychological balance, Qing practices the ancient Chinese martial art, Tai Chi, which is applied with internal power. “Many times your body is too exhausted to do any strenuous exercise. This is where Tai Chi comes in handy—it’s meditative yoga on the go.”

What’s in her future? Qing says, “The only way I would feel as if I have lived life to its fullest is to use my abilities in researching an area that could contribute to humanity.”

A clear and wise philosophy.