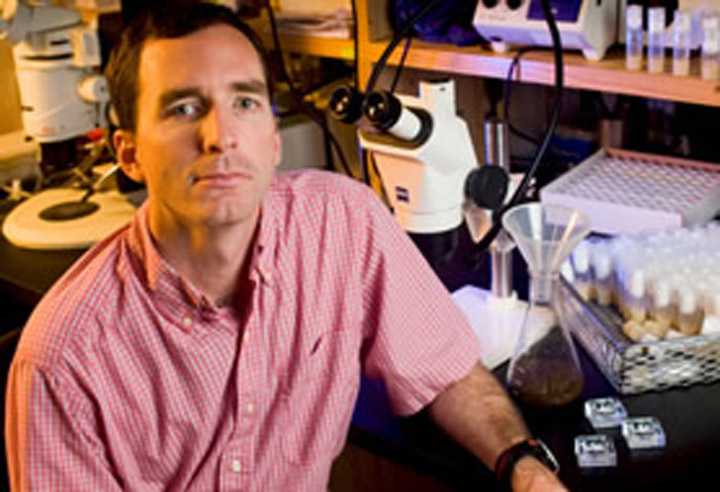 Developmental Biology seeks to understand organisms’ progression through their different life stages. “In our lab, we are interested in the development of the anterior-posterior body axis (the head-to-tail orientation displayed by most animals),” says John Poulton, who is working toward his doctorate under the guidance of his major professor Wu-Min Deng.

“We specifically want to know the genes involved,” John says. “Axis formation is a very complex process, requiring the cooperative action of many genes. Gene mutation can cause severe disruption in the development of the organism, sometimes leading to the growth of an extra tail, placed where its head should be, or vice-versa.

“We study the fruit fly, Drosophila melanogaster, because certain genes in its axis formation are known to be important in muscles, including the heart. Because of our shared evolutionary history, both humans and fruit flies still possess many of the same genes. We hope the fly will help us better understand how these genes function in humans.”

John received both bachelor’s and master’s degrees from Florida State, and has stayed to complete his doctorate because of the “quality of faculty in the Biology department.” In 2006 he was honored with the Graduate Student Research and Creativity Award for his work on the role of Dystroglycan in mediating the effects of EGFR signaling during axis formation. John explains, “In humans, this very important gene creates proper muscle function; its mutation often leads to muscular dystrophy. My research found that the levels of Dystroglycan are regulated by EGFR signaling, a form of cell-to-cell communication that has been implicated in many types of cancer in humans. It was a very exciting finding, as Dystroglycan was not previously known to be involved in cell communication.” His findings were published in the August 2006 issue of the Proceedings of the National Academy of Sciences.

Co-author of several publications, John has also presented his research at international conferences in San Diego and Houston. In Dr. Deng’s lab, John mentors several undergraduate Directed Individual Study (DIS) students. “It’s a win-win situation. The DIS students get course credit and great lab experience, while the mentor gets an extra pair of hands, as well as a fresh mind that can provide a new perspective to a perplexing question.”

After graduation, John hopes to find a postdoctoral research position in Western Europe. “There are specific labs that do top-notch research on similar questions that I’ve been investigating. I’m following my research interests wherever they take me.”