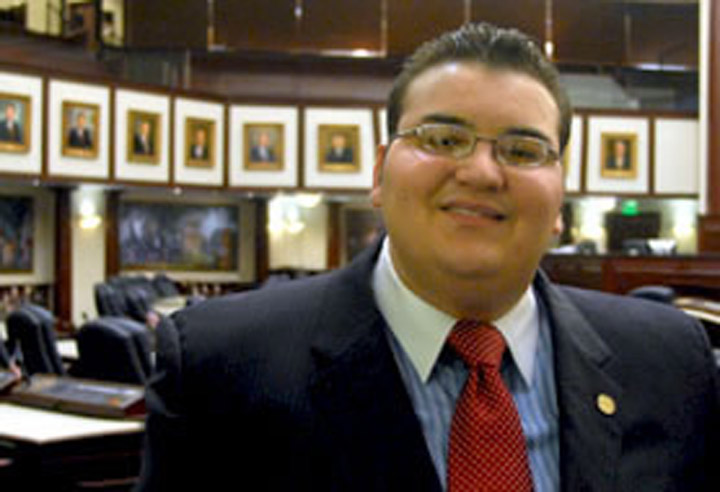 “When students serve other students, we help transform this institution of higher learning into a home.”

Edward Borrego is devoting his life to public service.

“I have always been drawn to the study of people, their surroundings, and the symbolic structures that give their activities significance,” he says. While still in high school, he was selected by the American Legion’s Boys State Program, which consists of 500 of the top students in the state, to attend a government-emersion program here at Florida State.

During that summer, Eddie learned of the University’s efforts to become one of the nation’s leading research institutions. “As a first-generation college student, I wanted to be a part of that journey. I was able to do so through the opportunities afforded me by the Center for Academic Retention and Enhancement.”

Since then he has worked to improve life on campus for his fellow students, through projects such as Night ‘Nole and Safe Bus, through state government outreach initiatives, and through FSU’s student body legislative agenda. “When students serve other students,” he explains, “we help transform this institution of higher learning into a home.”

Politics being his first love, Eddie has held numerous positions. For the Hispanic Latino Student Union he served as political action chair. For the Student Government Association, he has served as deputy chair of the Executive Cabinet, deputy secretary for Academic Affairs, and director for student relations. He was appointed by President Wetherell to serve on the Association of American Universities’ Accreditation Committee, the University’s Research Committee and the New Student Convocation Committee. Because of his tireless efforts, Eddie was honored with the President’s Award.

For the past two years, Eddie has served as an aide to Governor Charlie Crist. He began as a campaign volunteer, became an intern, moved to a part-time position, served as logistics advisor for the Serve to Preserve Florida Summit on Global Climate Change, and now serves full-time as assistant to the Governor’s deputy chief of staff.

“I believe that public service is the highest calling, and Eddie has a true servant’s heart,” said Governor Crist. “His dedication is constantly visible through his work ethic, leadership and service to others. As a proud graduate of Florida State, I hope that other Seminoles will follow his example.”

Despite the time and effort he devotes to public service, Eddie has maintained a spot on the Dean’s List each semester. Following his graduation in spring 2009, he plans to attend FSU’s College of Law so that he may “serve in a legal capacity.” We have no doubt he will do so with all of his heart.