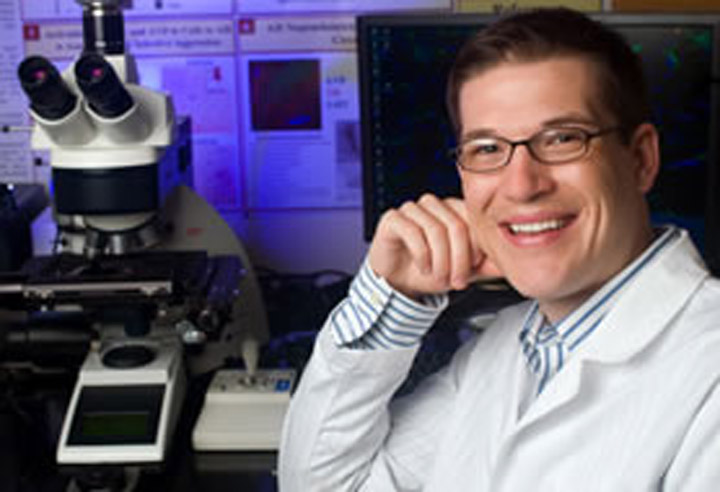 “In humans, aggression underlies two of the most understudied psychopathologies having the highest mortality rates—homicide and suicide.”

Kyle Gobrogge’s research interests, which reflect his passion for a better understanding of the human brain and behavior, are the neurobiology of social behavior, mating systems, and mental disease. To achieve understanding, Kyle studies prairie voles.

Why? Kyle explains, “In humans, aggression underlies two of the most understudied psychopathologies having the highest mortality rates—homicide and suicide. Basic research into the neurobiology of aggression has been limited to examining animal models where experimental conditions are physiologically manipulated to provoke aggression, which, unfortunately, often leads to more uncontrolled variables.

“However, pair-bonding behavior in prairie voles (Microtus ochrogaster) represents a unique model system to study brain-behavior relationships. Following mating, prairie voles develop selective aggression toward strangers. Thus, the prairie vole provides opportunities for study of a specific type of aggressive behavior that is induced by a naturally occurring event (mating) and is important for the maintenance of an adult-adult social attachment.”

As an undergraduate, Kyle realized how little is known about the genetic, hormonal, and neural control of the sex differences in clinical psychopathology. His interest in Behavioral Neuroscience was born. For graduate study, Kyle chose Florida State because both the “Program in Neuroscience and the Department of Psychology rank among the best interdisciplinary behavioral research environments in the U.S.” And, of course, Dr. Zuoxin Wang, Kyle’s major professor, is “considered the leading expert on vole mating systems.”

Kyle’s “life goal” is to educate not only himself but also others. His students give him rave reviews for his 200-undergraduate lecture course, “Brain and Behavior.” He says, “Teaching harnesses my enthusiasm in a way that inspires students’ discovery.”

His research has resulted in publication of over 10 peer-reviewed articles, book chapters, and commentaries, and he has given over 30 lectures worldwide, enabling him “to establish relationships with professionals in Behavioral Genetics, Psychiatry, Medicine, and Neuroscience.”