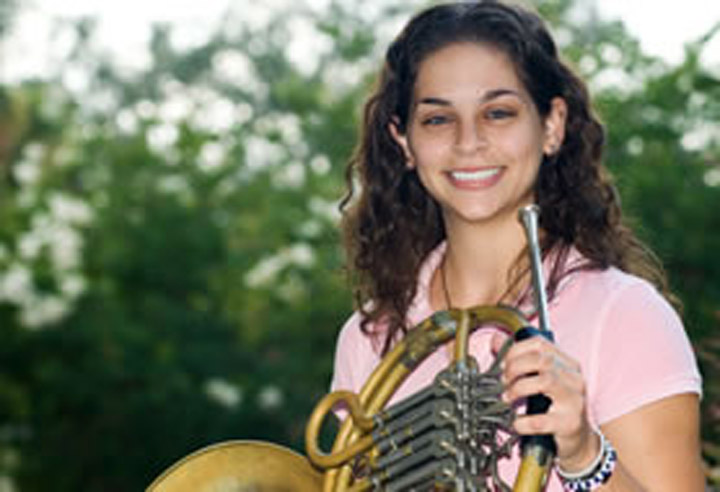 “Playing is the place I go to make myself happy, but I'd be lying if I said it's easy.”

“I started playing the horn in the sixth grade. I was eager to play—it had such a beautiful sound,” says Sivan Adato, only a junior and yet the principal French horn player in Florida State’s University Philharmonia.

“Music has been very influential in my life. Playing is the place I go to make myself happy, but I’d be lying if I said it’s easy—most of the time it’s the hardest thing because of the attention, patience, practice, and passion it takes. But it’s a huge part of who I am.”

“Being in orchestra my first semester showed my professors and peers that I was willing to work hard and was capable of performing well, which gave me the confidence to grow.” However, she says, “My confidence stemmed from my professors’ confidence in me.” One professor who has been a “wonderful mentor” is the orchestral director, Alexander Jiménez. “His love for music makes me love it even more, and he pushes my peers and me to be the best musicians we can be.” Also, Michelle Stebleton, Sivan’s horn professor, “has been extremely influential” in her development. “She’s provided me with a number of opportunities to learn and grow.”

This past spring Sivan joined the University Philharmonia on its six-performance tour through Georgia and South Carolina. The experience was “much like a professional tour—not much time to practice, a lot of travel time, playing with no warm-up, and adjusting to different halls and settings at the drop of a hat.”

A “great experience,” she says, because “there is no way to be taught how to adjust to those demands; you learn as you go. I love to be part of an orchestra more than playing solos. It’s such a great feeling when you know you’ve done a good job and the audience loved it. I try to balance myself, though, because it’s easy to get caught up in playing for others, forgetting to do it for myself, too.”