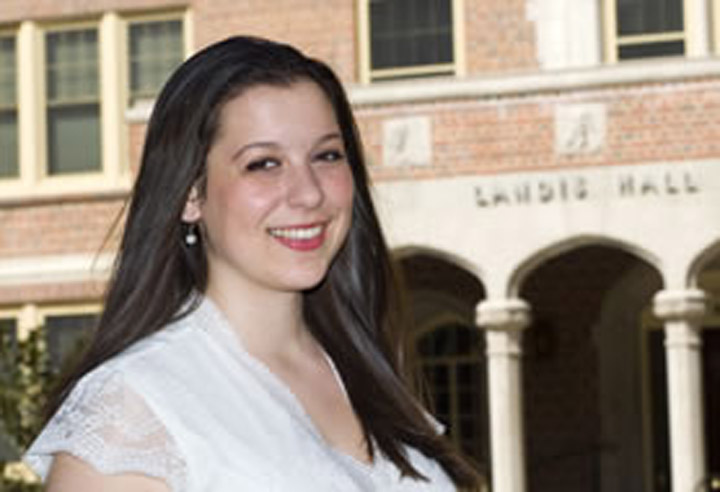 “I believe it is important to aim high. There's no excitement in mediocrity.”

“I’d like to be an active proponent in solving a major riddle of current epidemics—AIDS, Cancer, or Alzheimer’s,” says Casey Miskowski. “That may sound cliché, but I believe it is important to aim high. There’s no excitement in mediocrity.”

Judging from her short, but action-packed, college career, Casey lives by that creed. Credit gained through her high school’s International Baccalaureate program brought her in to Florida State last year as a sophomore. After being presented with generous scholarship opportunities and an invitation to the Honors Program, she thought, “Who wouldn’t want to be a Seminole?”

Her “passion for learning has always been the most fervent in Biology and English,” two very disparate fields. “It never occurred to me that this might be odd,” she says. Her high school teacher David Campbell ignited her love of Biology. “I now appreciate all facets of life on Earth and want to find out precisely how a biological system works.” A major in Creative Writing will teach her how to best express her passions. “Besides,” she says, “medical school doesn’t require a science major. They prefer the well-rounded student who shows a variety of talents.”

For Casey, the Honors Program “has opened whole realms of learning,” including invitations to participate in two research programs. In one, she gained hands-on laboratory experience, studying the membrane proteins of Mycobacterium tuberculosis. “If we can figure out the structure of these proteins, then it might be possible to identify pharmaceutical targets so that a new medicine can be created to fight off the disease.” The second, a Humanities’ seminar on research methods, skills, and resources, requires an individual project outside the standard curriculum for a 3000-level English course. She’ll then be eligible for a position helping a professor with a research project.

Living in the Honors community of Landis Hall was, Casey says, “an unexpected asset.” Wanting to “make such a large school feel smaller,” she reached out to her dorm mates and “began to really love residence life.” As secretary for the Landis-Gilchrist Hall Government executive board, she was “thrust into a crash course on how to program campus events.” After Landis-Gilchrist was honored with “Hall of the Semester,” her faith in her “ability as a student leader began to rise.”

She ran with her newfound faith—and was elected national communications coordinator for the Inter-Residence Hall Council (IRHC), the executive board that manages all campus hall governments. In this position, Casey represents the University throughout the year at national conferences.

It is through her work with the IRHC that Casey believes she has made the biggest impact. “I am here to study and learn, but I want to feel I have left something behind.” It’s clear to us, she will.