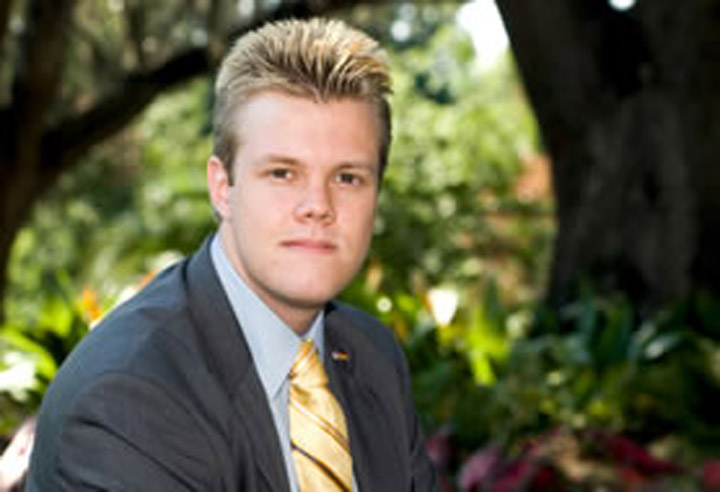 “It's not about how much money you have; rather, it's the amount of knowledge and perseverance you possess.”

“It’s important to realize what an impact the European Union (EU) is making in the world right now—politically, economically, and socially,” says Eric de Vries, an Honors senior double majoring in International Affairs and German.

Half of Eric’s family is German. He was born there, and as a teenager returned for another nine years, all of which gives him “a personal connection with the country, its culture and people.” But knowing both American and German cultures, he says, makes you rethink the ordinary. He can vividly recall his first football game at Doak Campbell Stadium. “When 60,000 people hand gestured and chanted in unison, I had an uncomfortable feeling. For many older Europeans, that display would have evoked very bad memories, but for an American, it was merely a display of school pride.”

For putting his knowledge of German in service to others—as an intern and volunteer at Tallahassee’s German School for two years—the Department of Modern Languages honored Eric with its Community Service Award. During the same period, he founded FSU’s German Club, which attracts students studying German, International Affairs, Business, and Music. He says, “Knowing the language and culture transcends a major, and besides Germany, there are several German-speaking countries—Austria, Switzerland, Luxembourg, and Liechtenstein.”

To gain first-hand experience in International Affairs, Eric has served as the chairman of the Special Political and Decolonization Committee during the World Affairs Program’s regional training conference held at Florida State. He was invited, and sponsored by our faculty, to attend Aidemocracy’s Transatlantic Approaches to Global Security conference in Washington D.C., and he is a recipient of the John Windmueller Award, which the World Affairs Program gives for outstanding performances in Model United Nation conferences. “If you’ve done your research, you can beat the top schools in the country,” he says. “It’s not about how much money you have; rather, it’s the amount of knowledge and perseverance you possess.”

Recently, all of Eric’s efforts came together—he is the 2007-2008 winner of the DAAD Undergraduate Scholarship, Germany’s equivalent to the Fulbright award. He says, “To expand the discourse on European integration, I have designed a ten-month study that combines taking courses at the University of Bremen, being a participant observer during an internship at Bremen’s Collaborative Research Center 597 (Transformations of the State), and working on my Honors in the Major thesis.”

Eric’s future plans include a master’s in European Integration, which will enable him “to work together, with, or for the European Union.”